Virender Sehwag: 'Shoaib Akhtar is the toughest bowler in the cricketing world'

The pair defeated Dirty Dawgs of Dolph Ziggler and Robert Roode at WrestleMania Backlash last night, becoming champions of the SmackDown label team in the process.

This is how Dominik’s first gentleman at the company begins, his first father since leaving the United States championship at Andrade with a nut from Madison Square Garden in December 2019.

WWE worked out a pre-game angle that saw Dominik being attacked by Roode and Ziggler behind the scenes. This means that his father was left to fight alone, although Dominik returned during the fight, joining the action as the fight unfolded.

Dominik scored the decisive crash after a Frog Splash at Roode after his father eliminated the former NXT champion with a 619. Rey took Ziggler outside to prevent him from entering and breaking the barrier.

Mysterio celebrated in the ring afterwards. 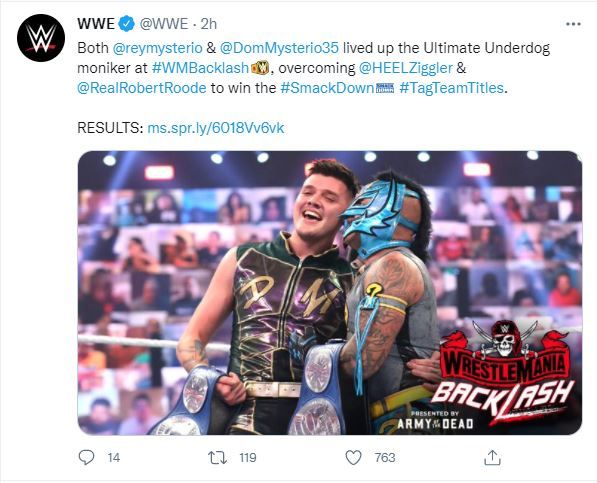 ‘WAPDA’ defeated ‘Pakistan Navy’, on the other hand, ‘NBP’ defeated ‘MPCL’ and...

PSG still 'a work in progress' for Pochettino after Messi arrival

Umar Akmal need prayers from his fans for his strong comeback

Pakistani cricketer, Umar Akmal asked for prayers from his fans for his...