What has Shoaib Akhtar named his pet horse?

What has Shoaib Akhtar named his pet horse?

The former fast bowler shared a short video of his horse running fast on the ground. 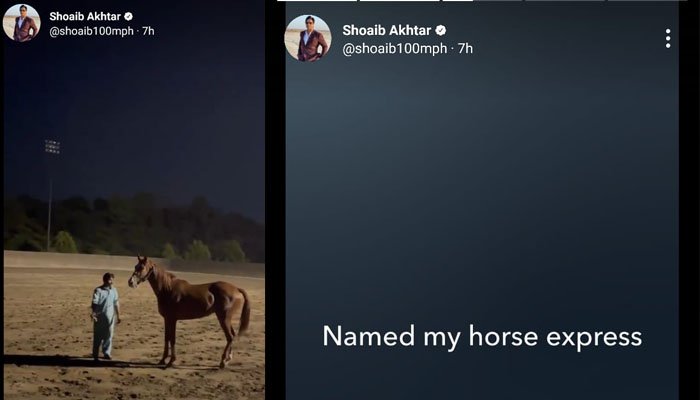 “I named my horse Express,” he said in a Twitter story.

He has previously shared videos of himself riding a horse, to which his teammates responded via comments.

The fast bowler’s NFT will be available on TenUp’s Cricket NFT marketplace, which is the world’s first-of-its-kind tokenized platform for browsing and bidding for all kinds of digitalized cricket art pieces.

Shoaib Akhtar made this announcement on Twitter and explained his corporation with TenUp Nation for the launch of his NFT.

I am so excited to enter in the world of crypto & blockchain, I am launching my NFT in collaboration with @TenupNation . Lets move to the future world with #ShoaibAkhtarNFT . pic.twitter.com/Ji2EvC0g5C

KPL an ideal opportunity for youngsters in Kashmir: Afridi

LAHORE: The treasury and the opposition members of the Punjab Assembly (PA)...

ISLAMABAD– Pictures of an obscene photo shoot in front of a portrait...