He said the watch’s calendar was based on its earlier creations that featured the Islamic Lunar Calendar back in 2011. 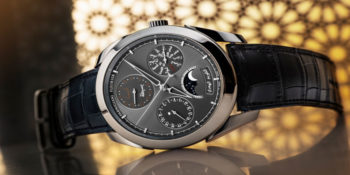 As well as the experience gained from the restoration of a pocket watch from the late 18 century that features an Arabic calendar.

The watch unveiled earlier this week to an exclusive audience of VIPs, fine watch aficionados, collectors.

The Islamic Calendar based on the cycles of the moon with the Hijri Year being made up of twelve months of 29 or 30 days, depending on the moon phase.

The months of the lunar calendar also change annually by a difference of 10 to 12 days.

As a result, each month always falls in a different season and ultimately varies from the Gregorian calendar.

This new piece features a 44.5 mm timepiece with a platinum case, a slate dial and rotor in platinum.

It shows the hours and minutes, and date in Arabic numerals, the name and length of the months in Arabic calligraphy.

The watch also shows the abundant and the common years.

It also features a moon phase in an aventurine sky and a power reserve of up to 48 hours.

As seen in all Parmigiani timepieces, every single component of the movement, even the hidden parts, decorated by in-house specialists.

No components were made of gold.

Parmigiani Fleurier one of the most comprehensive Swiss watchmaking firms in operation today.

A watch industry veteran with stints at Bulgari and Corum under his belt, Traxler joined Parmigiani as Chief Commerical Officer in March 2018.

WatchTime had the opportunity to sit with  to find out how his first year at the helm of Parmigiani went.