According to the details, a team headed by Amber Hawkes, Head of Safety Policy and Michael Yoon, Manager Trust and Safety, held a discussion with Director General FIA Wajid Zia regarding mutual collaboration and cooperation in data sharing as well as cyber crime awareness among social media users in Pakistan.

The Facebook team agreed on expediting sharing of relevant information when required by FIA’s Cyber Crime Wing in connection with their investigations.

The meeting also decided that the FIA would nominate focal persons from the Cyber Crime Wing in each province to liaise with the social media firm to investigate cybercrimes, especially against children and women.

The Facebook team expressed their commitment to working in close liaison with Pakistani authorities in combating cybercrime as per the company’s policy.

Moreover, the Facebook team also offered to conduct training of Cyber Crime Wing officers in order to keep them abreast with the latest social media trends and techniques.

Earlier, the Asia Internet Coalition (AIC) comprising global digital media giants have banded together against the government’s newly-introduced social media rules, threatening to suspend their services if the laws were not changed.

According to the details, The letter written to Prime Minister Imran Khan said that the AIC which includes Facebook, Twitter, Google, Apple, Amazon, Airbnb, Line, LinkedIn, and Yahoo, among others — said it was difficult for them to operate when such policies were in place.

The letter said, “AIC notes that the Government of Pakistan released the Rules without any form of consultation or
input from stakeholders outside the government. The way in which these Rules were passed is causing international companies to re-evaluate their view of the regulatory environment in Pakistan, and their willingness to operate in the country.”

“We also understand that some within the Government of Pakistan have drawn parallels between the Rules and Vietnam’s Law on Cybersecurity. It’s important to note, however, that while Vietnam’s Parliament approved the Law on Cybersecurity in June 2018, it has not yet been implemented. What’s more, a broad range of governments, industry and civil society groups have expressed grave concerns with the law and Vietnam’s proposed implementing regulations (which, again, have not been finalized or approved).” the letter also said. 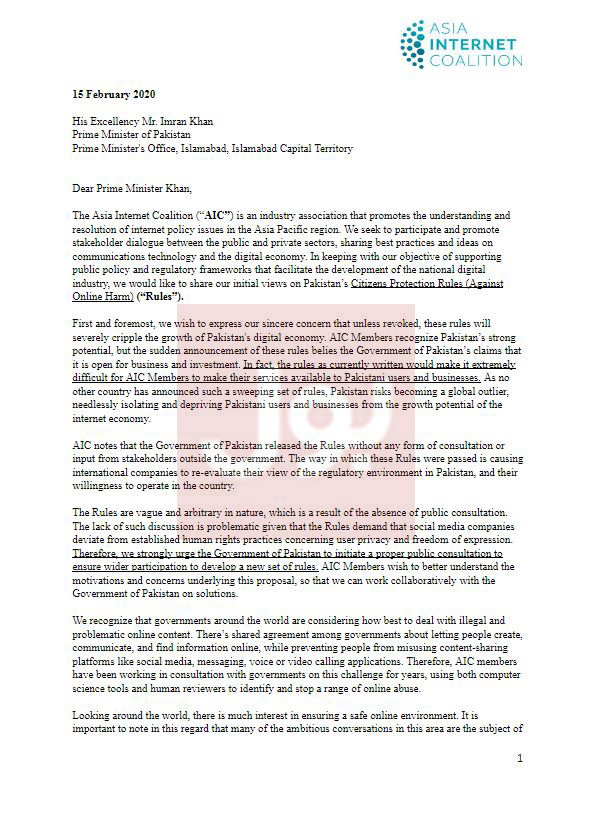 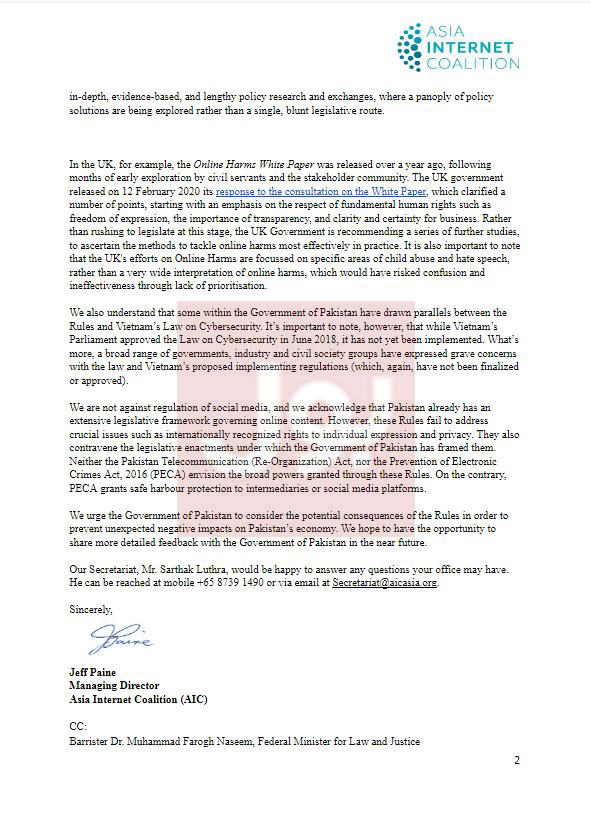 The government will have the power to fine social networking sites up to 500 million rupees if  they do not comply with Pakistan’s Law.

Government officials privy to the development said with this agreement, content that is considered blasphemous or insensitive towards religion can be removed from social media.

The deal was made possible after concerted efforts of the government on the matter to stop illicit and insensitive content aimed at religious figures of Islam and other religions.

It has also been revealed that social media bigwigs are directed to open Pakistan offices soon enough and register themselves with the government.

Earlier in February, The Asia Internet Coalition (AIC) has warned that the government’s new social media rules would “severely cripple” the growth of the Pakistan’s digital economy and make it “extremely difficult” for companies to provide their services to country’s users and businesses.

According to sources, in a letter to Prime Minister Imran Khan dated February 15, the AIC — an association representing Facebook, Google, Twitter, Yahoo, eBay and Apple among other industry giants and formed for promoting the understanding and resolution of internet policy issues in the Asia Pacific region — pointed out that no other country had announced such a sweeping set of rules and Pakistan risked becoming a “global outlier, needlessly isolating and depriving Pakistani users and businesses from the growth potential of the internet economy”.

Noting that the policy was prepared without any form of consultation or input from stakeholders outside the government, the association pushed for initiating a proper public consultation to ensure wider participation in developing a new set of rules.

Leica, the company known for camera sensors developed in partnership with Chinese...

Following the discontinuation of the Clarity EV last year, Honda will halt...

KARACHI: The Sui Southern Gas Company (SSGC) has suspended the supply of...

Rupee may come under pressure on foreign payments

KARACHI: The rupee is likely to remain under pressure against the US...

KARACHI: The equity market is expected to regain the positive momentum next...