The advertisements showed respondents were participating in the official 2020 US census that will commence on 12th March.

Fundraising group backed by Republican officials and Trump’s re-election team has promoted them. 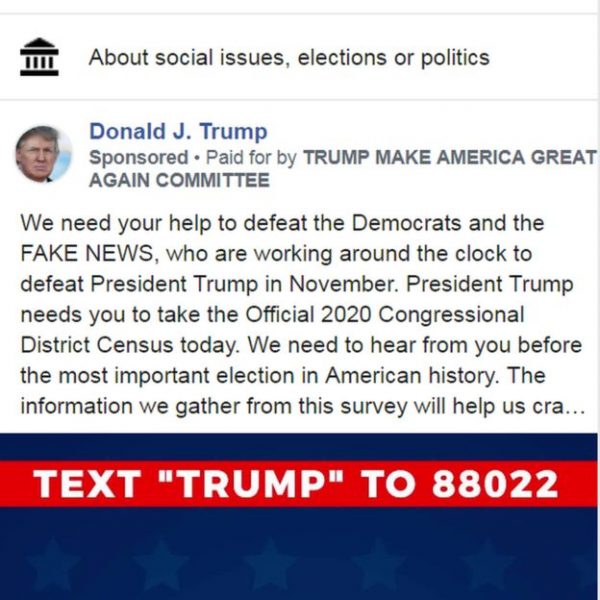 Facebook gave its stance, “There are policies in place to prevent confusion around the official US census,”

The spokesperson said, “This is an example of those being enforced,”

The adverts have been circulating since March 3. Users have to take part in the general survey focusing on Republicans’ talking points.

According to an international news agency, Trump and the Republican national party backed the campaign.

It regulates Facebook pages of both Donald Trump and Mike Pence, which contained controversial ads.

Vanita Gupta, president, and CEO of the Leadership Conference on Civil and Human Rights said that the ads were misleading.

She said in her tweets, “If Trump says a fake census is ‘official’, people are going to think its official,” “Trump’s deceptive ads will confuse people about how and when to participate in the 2020 Census, threatening their right to get counted and bring resources and political power to their communities.”

A page of Donald Trump’s website is displayed after people clicked the ads. Users were then asked to take part in a survey.

Users were asked to mention their age ad political learning in the survey. After that, they are asked questions about Trump talking over matters such as “Obamacare”, “the Democrats’ failed Impeachment Witch Hunt” and “Nancy Pelosi and the Radical Left”.

Users who complete the survey were then sent to a web page to ask them for donations.

A life-sized statue of the late philanthropist Sir Abdul Sattar Edhi has...

Russia's defending champion Mario Fernandes was hospitalized on Wednesday with a suspected...

Homes of the homeless

“Use of EVM is the only option to prevent rigging during elections”: PM Imran