America’s First Lady Melania Trump and Canadian Prime Minister Justin Trudeau at the G7 summit in Biarritz has sent the internet alight with its sense of European glamour.

Melania Trump was captured raising her face to give Trudeau a peck on the cheek during the leaders’ family photograph at the G7 Summit in Biarritz on Saturday.

Complicating matters for Melania, 49, and Trudeau, 47, is that the 72-year-old U.S. president Donald Trump appears defeated in the photos, as he tends to business while the two of them share a moment. Granted, Trump appeared to be holding his wife’s hand at the time.

Before a photo went viral from February 2017 in which Trump’s daughter, Ivanka Trump, seems to look at Trudeau with a longing expression on her face. The Ivanka moment occurred during a Trudeau visit to the White House. 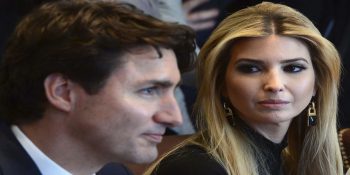 If you love watching cooking videos on YouTube then you must have...

The National Assembly (NA) session is underway today to debate over the...

Demonstrations by farmers are still in progress in India as Twitter users...

Dubai police found a left-alone infant in an apartment by his distressed...