At the tech company’s recent event in California, the company unveiled the all-powerful new iPhone and iPad models along with its streaming TV service.

However, what caught the tech world’s attention was the Silicon Valley titan’s triple-camera iPhone, which to say the least has given social media a lot to talk about in the coming days.

And of course, not taking a back seat was Malala Yousafzai who has joined in the fun of Apple’s newest offering.

The Nobel laureate took to social media, sharing a photo of what she was wearing and tweeted, “Is this just a coincidence that I wore this dress on the same day as Apple iPhone 11’s launch”.

Is this just a coincidence that I wore this dress on the same day as Apple iPhone 11’s launch #iPhone11 pic.twitter.com/k6s4WM4HKq

Malala’s bright blue dress featured a pattern similar to that of the iPhone11 Pro.

Of course, the internet had a field day with Malala’s comparison.

On replying to Malala’s post, Mathira criticized her saying that Malala should have shown her concern over Kashmir issue rather than focusing on her dress and iPhone 11.

Mathira wrote, “First of all she has time to post about iPhone stuff why not Kashmir I don’t get it her tweet against Priyanka and Kashmir will help. But she is worried about her dress and iPhone.” 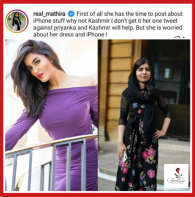 The iPhone 11 will have two back cameras, including an ultra-wide-angle lens and the next generation of microchips, the A13.

A Woman from Baltimore, US has become a gossip topic as she...

Users around the world are having difficulty accessing the microblogging site Twitter....

Ramazan Mein BOL: Little Maryam gives her take on how to prevent COVID-19

The life with the novel coronavirus outbreak is the new reality people...

From Tajdar-e-Haram to Asma-Ul-Husna, Pakistani Vocalist Atif Aslam has continued to win...

Twitter is trending with Sehri, Lassi and Paratha as Muslims observe first fast

Pakistanis are observing the first fast of Ramadan and Muslims enjoyed the...

‘SKMT Karachi will be equipped with all the latest treatment facilities,’ PM

Can you find a bunny among these cats?

Here is a crowd of cats and their tails are sticking up....

Sindh Education Department has decided to extend the suspension of physical classes...