CPLC Karachi releases crime statistics for the month of September

As many as 18 people lost their lives as result of target killings and other incidents of violence in parts of the metropolis during September 2019.

As per crime statistics released by Citizens Police Liasion Committee (CPLC) here on Tuesday, some 18 people were killed in target killing and other violence incidents as the fresh wave of crime has again created sense of fear among Karachiites.

Some 26 vehicles were snatched on gunpoint and some 163 theft cases were reported during the month under review.

Some 147 motorcycles were snatched on gunpoint while 2806 others were stolen from various localities of the city. 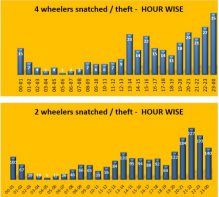 The data showed that armed men snatched as many as 1737 mobile phones from citizens on gunpoint while 2542 cellular phones were stolen.

The city police could recover only 200 stolen mobile phones.

One incident of kidnapping for ransom and three extortion cases were reported during September.

Earlier, 36320 mobile phones were snatched and stolen during street crime incidents in the metropolis, reports said.

Besides the snatching of cellphones, 21,000 motorbikes and 13,000 cars were either stolen or taken on gunpoint from citizens.

In comparison with the January 2018 report of CPLC, January 2019 saw a rise in street crimes.

Earlier in April, Citizens Police Liasion Committee (CPLC) in its report has said that 9,664 citizens of the metropolis were deprived of their cellphones during street crime incidents.

According to the committee, over 60 people including policemen were killed in last three months.

Besides the snatching of 9,664 cellphones, 5,813 motorbikes and 345 cars were either stolen or taken on gunpoint from citizens, the report issued by the CPLC noted.

Explained: What Tehreek-e-Labbaik Wants And Why They Are Protesting?

The Pakistani government has decided this week to ban the Tehreek-e-Labbaik Pakistan,...

The Interior Ministry has prepared a summary to ban Tehreek-e-Labbaik, a draft...

The Islamabad High Court (IHC) has accepted the petition of Leader of...