Paris’s most famous icon turned pink as part of a push for breast cancer awareness.

October is breast cancer awareness month, and Paris officials did their part to raise awareness by lighting the Eiffel Tower in pink.

The illumination is part of the ‘Ruban Rose’ event launched by Paris’ Mayor Anne Hidalgo, who was on hand to witness the spectacle.

Organizers wrote that lighting up the tower in pink was “more than a symbol – it’s a sign of victory over this illness”. 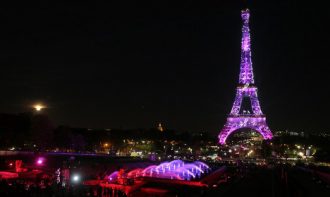 Indeed, breast cancer is the deadliest cancer for women worldwide.

A series of events including beauty therapy and solidarity marches have also been put on by organizers at Cancer du sein.

Earlier, Pakistani actress Veena Malik after getting a successful breast tumor removal surgery urged women to be more cautious of their health.

Turning to Twitter, the actor posted pictures of herself after successfully ridding herself of the disease, expressing gratitude to God while also giving a shout-out to her doctor for her assistance.

“With the grace of Almighty Allah, I had a successful fibroadenoma removal surgery at the South City Hospital, Karachi. I am indebted to all the love and prayers said and expressed by my people,” she said.

Paul Pogba says he enjoys more ‘freedom’ with the national side and...