Quran with gold on silk pages will leave you mesmerized

A Muslim woman artist spent three years of her producing an art of Quran made of gold, worth billions.

An Azerbaijani painter Tunzale spent 3-years, dedicating her life to rewriting the Quran with gold on silk pages.

The result is so captivating that it would even melt the heart of an atheist.

The beautiful art by Tunzale leaves everyone mesmerized. 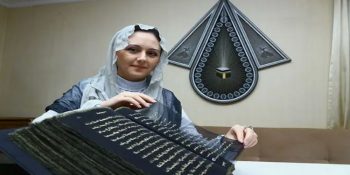 The Holy Book has rewritten on so many different materials, but Tunzale found out that nobody had written it on silk.

She took the official version released from the Diyanet, the Turkish Presidency of Religious Affairs, as the main source.

A little more than 3 pints of liquid gold was acquired, along with silver. 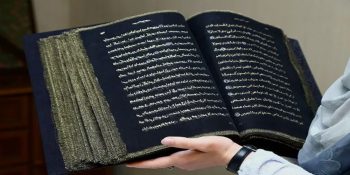 Moreover, this version of the Quran considered a masterpiece globally.

During the process, no laws of the Quran violated, as the it provides a lot of references of silk itself.

Earlier, China planned to rage war against Islam and the Muslim world as authorities in the communist country have decided to modify the Holy Quran.

China’s extremist moves have come to light since it started the ethnic cleansing of Uighur Muslim minority.

However, the Chinese government have denied its blatant attempts.

Nevertheless, the ethnic cleansing is not hidden from the world.

Instead, they claim them to be “vocational training centres designed to combat Islamic extremism.

American Quran reciter and Singer Jennifer Grout stunned the internet and made waves online as she recited verses of the Holy Quran in her flawless voice.

Ayat Al-Kursi, which translates to “The Throne Verse,” is the 255th verse of the Quranic Surat Al-Baqarah.

Muslims hold the verse in particularly high regard and believe that reciting it at night puts them under divine protection.