He is scheduled to visit on 4 pm local time.

The capital Islamabad’s main Kashmir Highway and other roads decorated with Turkish and Pakistani flags as well as life-size portraits of Erdogan, President Arif Alvi and Prime Minister Imran Khan. 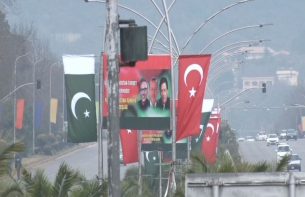 The president’s plane is scheduled to land at Noor Khan Airbase at 4 p.m. local time where Prime Minister Imran Khan will receive him.

He will be presented a guard of honor.

Erdogan’s visit is the fourth since 2002 and second since he became president. 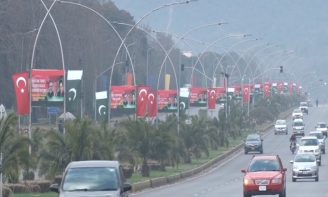 “We look forward to the visit of President Erdogan, who is the leader of a great nation,” said Bilawal Bhutto Zardari, chairman of the opposition Pakistan Peoples Party (PPP).

“We have great regard and respect for the Turkish president as a prominent Muslim leader,” he told reporters in Islamabad.

The PPP welcomes Erdogan’s visit to Pakistan, he added.

“Turkey has always stood alongside Pakistan in trying times. President Erdogan’s upcoming visit is a reflection of the strong friendship between Pakistan and Turkey,” said Elahi.

“we looking forward to accord a warm welcome to Turkish President Recep Tayyip Erdogan on his visit to Pakistan.”

“His visit will cement the relationship between the two brotherly countries.” 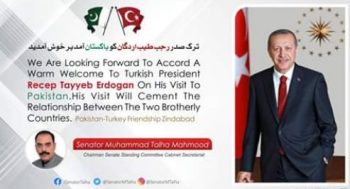 Furthermore Mohammad Ibrahim Qazi, grandson of the late Qazi Hussain Ahmad, the leader of the Jamaat-e-Islami party, said President Erdogan the moral compass of Muslim leadership specifically and the Islamic Ummah in general.

“He has successfully championed the cause of oppressed Muslims — especially in Indian-occupied Jammu and Kashmir, which is a flashpoint of war between India and Pakistan — so much so that Syed Ali Shah Gilani, the veteran freedom leader, wrote a letter of thanks for President Erdogan’s supportive speech at the UN,” Qazi,

“President Erdogan has supported Pakistan to become a member of the Nuclear Suppliers Group and Pakistan escaped a $1.2 billion penalty as President Erdogan helped resolve the Karkey dispute, whereby the ICSID (International Center for Settlement of Investment Disputes) imposed a huge fine on the country looming in the current account deficit,” he said, referring to a dispute between the Pakistani government and a Turkish power company, which the latter won.

Moreover Rabia Zakir, an Islamabad-based artist, has painted a life-size portrait of Erdogan to pay tribute to him. She shared a photo of her painting on Twitter along with a message.

“My latest painting is a personal tribute to the strong and never-ending bond between Pakistan and Turkey. Welcome our honorable guest, great Muslim leader President of Turkey, Recep Tayyip Erdogan.”

Saadia Peerzada, a Karachi-based lawyer, observed that Erdogan’s record fourth visit to Pakistan “shows his love and affection for Pakistan and its people.”

“Welcome Mr. President. We eagerly look forward to welcoming you,”

During July and August of the current financial year, the imports of...