Pakistani gamers are standing in arms against the government over the continuing ban on popular mobile game PUBG following a court order to suspend the ban.

The ban was imposed by the Pakistani Telecommunications Authority (PTA) on July 1, following complaints from parents who said the children were addicted to the game.

Nevertheless, a Pakistani court lifted the ban on Friday and ordered PTA to restore the game to the Telecom watchdog.

Waqar Zaka, a social media star, has been speaking out against the...

Despite the orders, the ban is still in place, irritating the gamers who have now taken to Twitter to urge Premier Imran Khan to restore the game under #ImranKhanPUBGKholo. 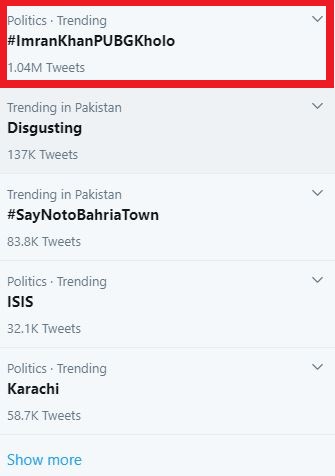 The #ImranKhanPUBGKholo is trending in Pakistan and has started by Pakistani celebrity Waqar Zaka. Until now, more than 1 million people have tweeted using the hashtag to uplift the ban from the game.

The power of PUBGM Pakistan ❤💯
And if still Imran Khan doesn’t reply to us then we, the Youth of Pakistan will be extremely disappointed, we’ll find a new game to play anyway, but the respect in our hearts for IK will never come back#imrankhanpubgkholo pic.twitter.com/xKtdfpUK1q

There are no regrets now in saying that we wasted our precious vote. There are other issues like corona kashmir karachi is drowning but nooo our govt is going after a video game. This is tabdeli. No vote again for Pti.@ImranKhanPTI #ImranKhanPUBGKholo pic.twitter.com/Bypj0WiAz7

I want to live in a country where there is no banning culture. Where the youth has enough awareness to know whats right & wrong for them. For that we must invest everything we can in our basics & schooling to get results in coming years. Not by banning games. #ImranKhanPUBGKholo pic.twitter.com/TxpljEacoE

#ImranKhanPUBGKholo
Save Esports
Save Careers of Many of gaming Videos Creaters,Youtubers
They are atleast Independent Citizens not depending on their parents pic.twitter.com/ONdYNJ9QB2

Next Vote Imran Khan Ko Nhi Denge
Are You Agree ❓

Also, a message to the youth, I know it can be very frustrating & demoralising leken har subha se pehle andhera hota hai. I request everyone protesting the bans to not use any hate speech. InshaAllah @ImranKhanPTI sir will not disappoint his youth 🙏🏽#ImranKhanPUBGKholo pic.twitter.com/tEwofkav53

Popular mobile game PUBG has been banned in Pakistan on 1st July....

A teenage girl is gaining popularity as she ‘resembles’ late pop star...

Gorgeous actress Ayeza Khan has made a new addition to her family....

5 national songs you should listen on Independence Day of Pakistan

The 73rd independence day of Pakistan will be celebrated on 14 August...

Today USD TO AED Exchange Rate –  The exchange of different currencies such...