WhatsApp is a popular social media platform and has a huge number of users around the world, especially in Pakistan.

The tech giant collaborated with Facebook several months ago. Soon after that, users have been allowed to share WhatsApp stories on Facebook. However, users had no idea they will see advancement in it.

There isn’t much detail in WhatsApp’s new privacy section, but there aren’t any shocking revelations, either. The chat service is outlining the functionality you’d likely expect. Still, this is a reminder that WhatsApp is just one part of a larger Facebook ecosystem, and that your data won’t necessarily stay within the service — worth noting, even if your data won’t travel very far.

WhatsApp’s new policy is now trending on top on Twitter. Some Twitter users have expressed anger over the advancement, while some others have seen a sarcastic side of the story. 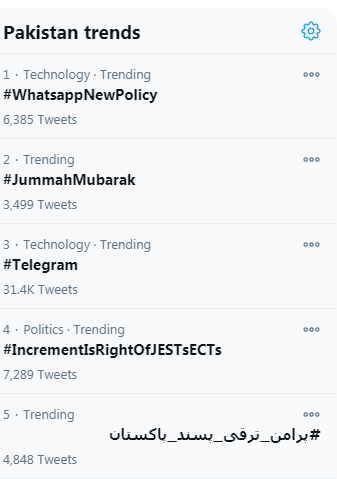 *Me who is already in Telegram just to download Movies and Webseries #Telegram #WhatsappNewPolicy pic.twitter.com/VgpVxwg2CJ

Useless #WhatsappNewPolicy
Mark Zuckerberg How can you spoil whatsapp ?? What a Greedy Fool, I will Delete My *Whatsapp* bcoz of the NEW Monitoring Privacy Policy which will take place From Now till February-8.

Telegram will be my New Whatsapp. Okay 👌 pic.twitter.com/NpQ3exbcbQ

If you’re not paying for the product, then you’re the product. . . . .🙃#WhatsappNewPolicy pic.twitter.com/FVgwjvuO2m

Finally got a reason to delete this boring app ✌🏻 pic.twitter.com/mJyvKQhB7j