It’s a mystery that everyone wants to solve, but can you solve this out? 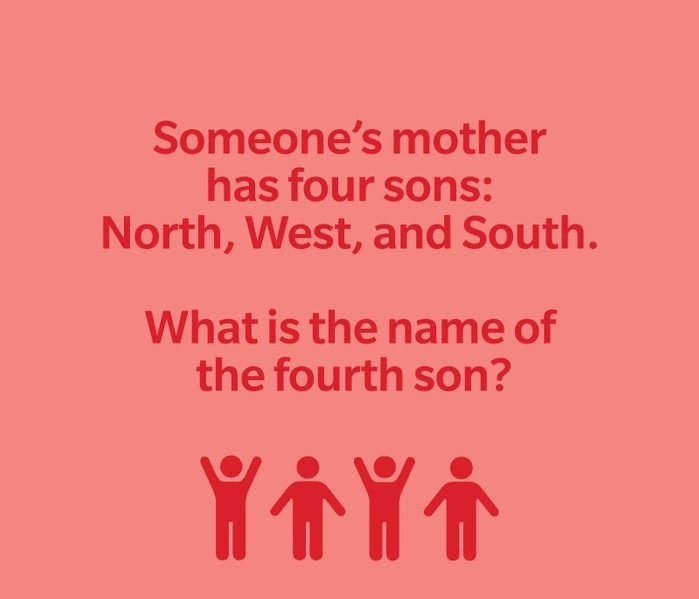 The entire riddle goes like this: someone’s mother has four sons: North, West, and South. What is the name of the fourth son?

“Someone’s mother has four sons” is how one of the latest viral riddles starts. The answer that seems obvious turns out to be wrong. Even the smartest people can’t always figure out the right answer. It’s no wonder, however, that the “Someone’s mother” riddle has got so popular on social media sites like Facebook and WhatsApp—and that everyone wants to know the answer.

But to answer someone’s mother riddle correctly, we have to forgo that pattern of thinking. It helps to read the question again, more slowly. Let’s start with the very first word: Someone. Someone could be anyone, really. So, let’s pick someone to stand in for Someone. I’ll call him Theodore.

Now, instead of “Someone’s mother,” we have, “Theodore’s mother has four sons: North, West, and South.” And who is that fourth son? Why, it’s Theodore, of course!

So, looking back at the original question, it’s now clear that the correct answer is: Someone!

Riddle That Will Wreck Your Brain

You need to be one smart cookie to solve this long riddle!...

Lady shocked to see a crocodile in the back garden

A lady was left shocked to saw a four-foot-long 'crocodile.' Sarah Jayne...

When a resident called police in New York to report a cat...

The "Skinny House" in Boston, which tradition has it was erected during...

These Japanese twins are labeled as the world's oldest twins

At the Moselle Open in Metz, former champions in a strong field,...