Actress Minal Khan and Ahsan Mohsin Ikram’s wedding event is happening tonight as the couple is officially married now and stepping towards their new journey.

Minal khan’s beloved sister Aiman Khan is spotted in her Nikkah with teary eyes and we’re sure all sisters can relate to it. Aiman’s husband Muneeb Butt can also be seen in Nikkah’s video.

Have a look at Minal’s nikkah video:

In the video, Aiman Khan looks breathtaking in all-golden attire with orange touch and complemented her look with golden jewelry and Muneeb Butt is spotted in white Kurta Shelwar with matching Prince coat. 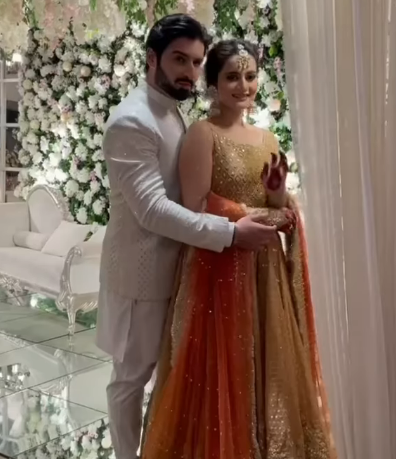 Actress Minal Khan is officially tied the knot with Ahsan Mohsin Ikram as...