The heated race for the President’s title is at its peak. The counting of votes is still underway.

But the election yielded no immediate outcomes in the state of Wisconsin, Pennsylvania, Nevada, Arizona, Georgia, Michigan, and North Carolina.

Joe Biden has since been declared victorious in Michigan and likely Wisconsin.

He has achieved 253 Electoral College votes in the race whereas Republican Donald Trump has achieved 314. Both need 270 to win the White House.

A win in Pennsylvania or two of the other four remaining states would be enough for Biden to win.

On the other hand, Trump needs to win Pennsylvania and three of the remaining four states.

A senior Trump official told the international news agency that Mr. Trump did not plan to concede if Mr. Biden ultimately declared victory.

Mr. Trump’s team has raised millions of dollars for litigation.

Former White House chief of staff Mick Mulvaney predicted in a webinar hosted by Think Tank that Mr. Trump would “absolutely” run for president again in 2024 if he lost to Mr. Biden. 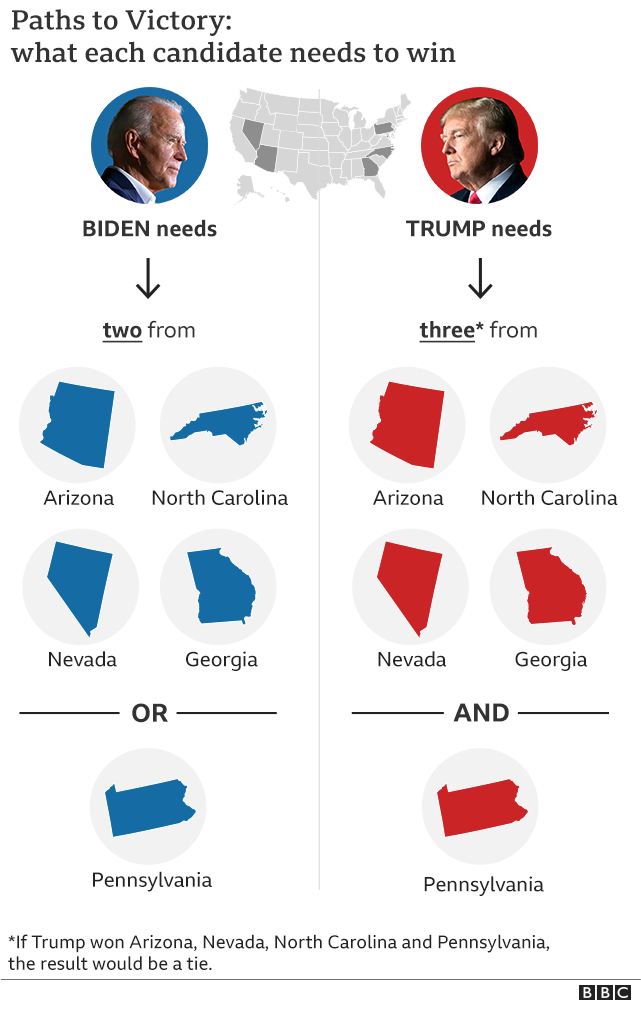 What is the latest on counting?

Pennsylvania Secretary of State Kathy Boockvar told a press conference that most ballots would be counted by Friday, but the race was still too tight to declare a result.

“It’s very close in Pennsylvania, right, there’s no question,” she said on Thursday. “That means it’s going to take longer to see who the winner is.”

Mr. Trump was leading in Pennsylvania by fewer than 23,000 votes with 96% of ballots tallied. He also led Georgia by 1,800 votes with virtual ballots counted.

Gabriel Sterling, a spokesman for Georgia’s Secretary of State, said he had seen no evidence of voter fraud, adding that election officials were “doing extremely well” under pressure.

In Arizona, Mr. Biden’s lead was steadily eroding and was at about 46,000 votes with 91% of votes tallied.

Mr. Biden was leading in Nevada with more than 11,000 over Trump. An election official there said the results from more than 51,000 postal ballots would be updated on Friday.

US Election 2020: ‘If you count legal votes I easily win’

The counting of votes of the ongoing Presidential election is still underway....

A well-known cafe in the United Arab Emirates (UAE) has offered free...

Amidst the increasing COVID-19 rate across the globe, Bahrain will suspend dine-in...

The Saudi cabinet, in a meeting chaired by King Salman bin Abdulaziz...

US Withdrawal From Iran Nuclear Deal Would Be Wrong Decision: Israel

Israeli Army Chief of Staff Aviv Kochavi has said that Israel has...

India observed 26th January as ‘Republic Day’. However, chaos was seen as...