Shahnaz Ansari – Member of the provincial assembly of Sindh gunned downed over a land dispute, here on Saturday.

According to the details, Shahnaz was assassinated in Noshehro Feroz district of Sindh, during a condolence visit of her brother in law.

She was targeted by the relatives of her brother in law – Dr. Zahid Khokar, who had a land dispute with his brother.

Ansari received three  bullets and shifted to the Nawabshah hospital in critical condition, where she succumbed to death.

Her family sources confirm that she visited the village to attend the Chehlum of her brother in law, despite she was told – not to visit the village.

Earlier, the deceased MPA had filed a written complaint to the Deputy Commissioner of district Noshehro Feroz against her sister’s in-laws.

She named Akhitar Ali Khokar, his brothers and a son and accused them of harassing the MPA’s sister – widow of Dr. Zahid Khokar over a land dispute.

The Application filed by her stated that the above-mentioned persons were harassing and threatening to kill the MPA and her widow sister. 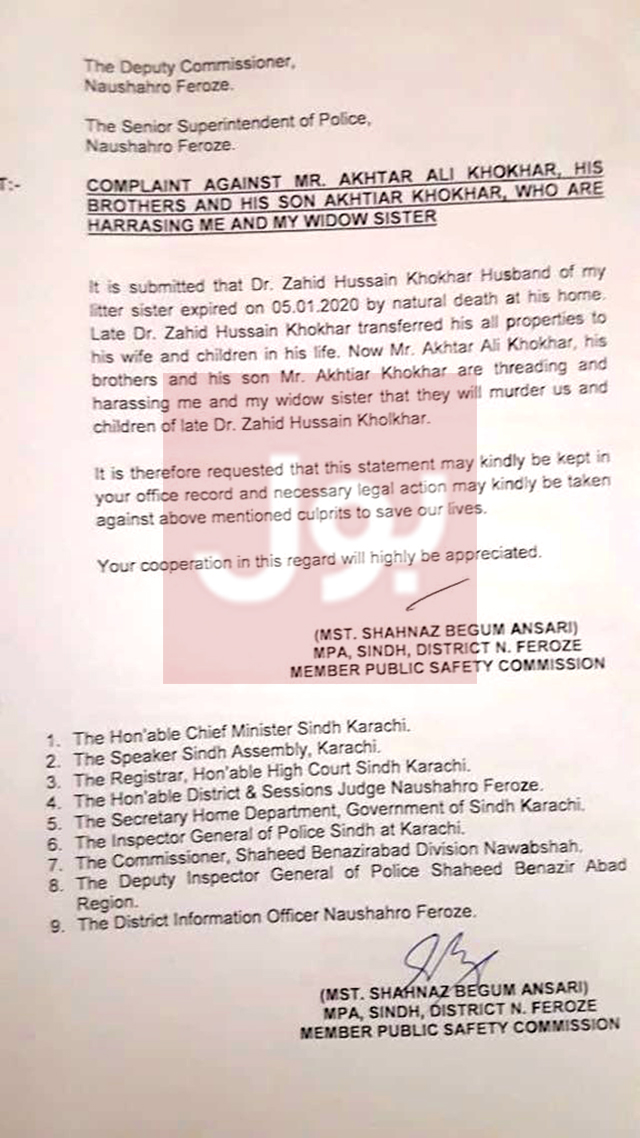 Pakistan Peoples Party’s top leadership including Bilawal Bhutto Zardari expressed the heartiest grief on the incident and demand for immediate justice for the deceased MPA.

Bilawal Bhutto Zardari said that the death of Shahnaz has led the entire PPP family in state of sorrow and we are looking for immediate action against the criminals.

The IG Sindh directed his subordinate in Nawabshah for swift action while using all available evidence to figure out the assassins.

He also ordered to assure the security of the family of deceased MPA and her sister. The police chief of Sindh advised the authorities in Nawab Shah to use snap checking technique all over the province for the immediate arrest of the culprits.

Educational institutions will not reopen from June 1, notification issued

The Sindh government has announced not to open all educational institutions in...

Chinese students studying in the US are likely to be expelled

The United States has signalled to expel thousands of Chinese students studying...

The Sindh government allowed traders to open the businesses on Saturdays and...

In India, a group of monkeys attacked a medical officer, snatched blood...

Today GBP to PKR exchange rate is RS 194 in the currency...