Pakistani actor Omair Rana, who is recently working in drama serial Pyar ke Sadqe has been accused of sexual assault by LGS students 1A1.

The Lahore Grammar School scandal has taken everyone’s attention on social media. Many female students have come forward who faced sexual harassment by different LGS 1A1 male teachers. The school administration has although fired those involved, but a new yet popular name among the harassers have emerged.

Among many other celebrities, Osman Khalid Butt also appreciated the girls who rose their voice against the harassment. A girl, in response to Butt’s tweet, wrote that,

“Sir, you missed a name: Omair Rana. He used to teach Drama at LGS 1A1. Many have come forward about their uncomfortable experiences with him too. Attaching screenshots below.” 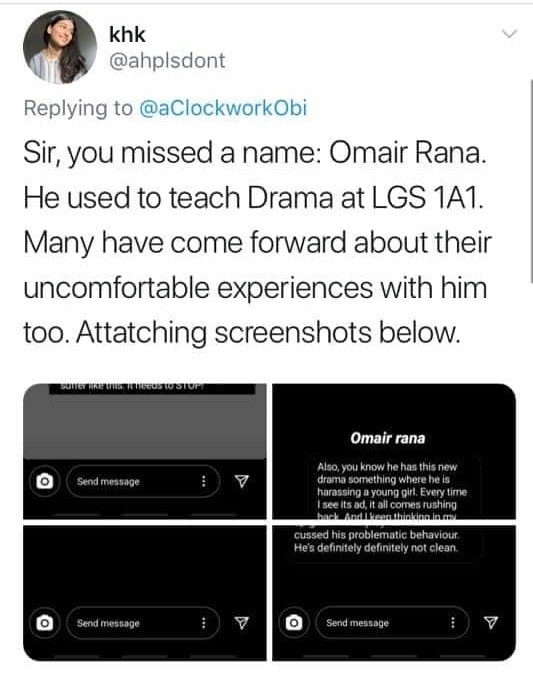 Several students had also accused the actor’s wife Maira Omair Rana, who works at LGS’s admin office. A student admitted she used to do victim-blaming and scolding girls about their ‘revealing clothing’ whenever girls complained to her. “She also advised the victims that for their grievances they could not come to her.”