The popular character of Ertugrul Ghazi died in the latest episode of “Kurulus: Osman”, a historical TV series created by Mehmet Bozdag.

Soon after his passing in the 39th episode of the series, social media broke out in tears and mourned the death of Ertugrul Ghazi, played by Actor Engin Altan Duzyatan in the last five seasons.

Social media flooded with tributes to the character that became a new heart-throb and wowed the audiences around the globe, particularly in Asia and the Middle East, and has been praised by Prime Minister Imran Khan himself, who advised the nation to watch this Turkish series. And, Pakistani people have actually fallen in love with it.

He shared a picture from the latest episode with a Turkish language caption. “It was a very difficult scene, full of emotion and an endless moment,” he wrote while referring to the filming of Ertugrul’s death.

“Tamer Yiğit, the giant actor in my arms, I had @enginaltandzytn and his Ertuğrul Gazi in my eyes.” 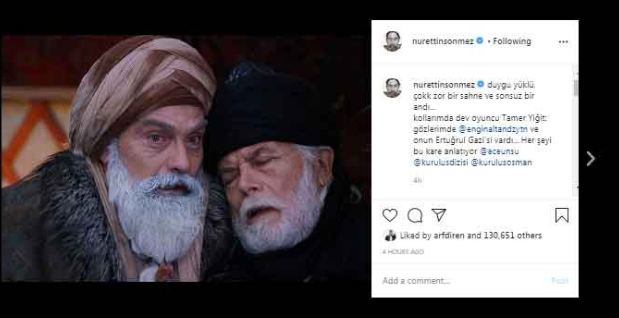 Here is how Twitter reacted on Ertugrul Ghazi’s death:

Its not just the end of a character, its end of an era 💚❤ #ErtuğrulGazi pic.twitter.com/Ta9fRk3WkH

Thanks to @eadksk to Bring This Character to LIFE. You are Amazing Artist! Also Thanks to Tamer Yigit Who played the Old Ertugrul Bey, He also Did a Good job!
We will not gonna Forget the Legacy and The Father of #OsmanBey
Thanks to @mmehmetbozdag for Making this! #ErtuğrulGazi pic.twitter.com/XY2muPMTLR

#ErtuğrulGazi
Love you so much, our favorite actor and character ever…… pic.twitter.com/K46403jFud

Ertugrul Ghazi is a historical figure dating back to the 13th century, who belonged to the ‘Kayi tribe’ and fought for his religion, conquering many lands in the way of Allah.

He was the son of Suleyman Shah of Oghuz descent. Ertugrul’s son, Osman, succeeded the throne and founded the Ottoman Empire around 1299. The term “Ottoman” is derived from Osman’s name, which was “Uthman” in Arabic.

At its height the empire encompassed most of south-eastern Europe to the gates of Vienna, including present-day Hungary, the Balkan region, Greece, and parts of Ukraine; portions of the Middle East now occupied by Iraq, Syria, Israel, and Egypt; North Africa as far west as Algeria; and large parts of the Arabian Peninsula.

Ertugrul Ghazi was a warrior whose strength, belief, loyalty and strong spiritual belief always helped him move forward with one aim: to defeat the enemies and establish peace and brotherhood all over, by inculcating belief in law and justice.

An analysis of the ‘fragile’ Pakistan-US friendship

KARACHI: The Afghanistan war signaled two things; the first, more obvious one, is...