The false news spread like a fire on social media. Netizens started to believe without any verification. However, Meesha Shafi has finally spoken regarding the rumors.

She took to the micro-blogging site Twitter and negate all the rumors spreading against her.

Meesha also tweeted a thread in which she told how she deals with all the propaganda, abuse, and false information.

10:35 am
Made myself a black coffee. I quit coffee altogether around 1.5 years ago started beginning my day with celery juice. But on days like this, when I’m being juiced myself, coffee helps. Thank you coffee 🙏🏼

10:55
My husband walked into the room, gave me a pep talk only a true feminist ally would. ‘I want you to remember that what they’re doing once again reeks of desperation and fear. Don’t let it shake you, I know it’s easier said than done.’ This makes me cry. Thank you M ♥️

Here Is How The Fake News Spread:

On March 22, Wall Street Journal published a report on Meesha Shafi with the title “Pakistani Singer Faces Prosecution for Accusing Pop Star of Groping Her.” The report highlights how Meesha “set off the country’s most high-profile #MeToo debate when she accused a fellow pop star of groping her. And now she was being prosecuted on a criminal defamation charge and is facing possible prison time.”

Taking chunks from the WSJ, DailyMail claimed that the Pakistani singer Meesha Shafi “faces three years in jail”. On the other hand, they also quoted the WSJ report.

The headline of DailyMail’s report titled, “Pakistani singer who accused the pop star of groping her and sparked country’s #MeToo movement faces three years in jail for ‘criminal defamation.” 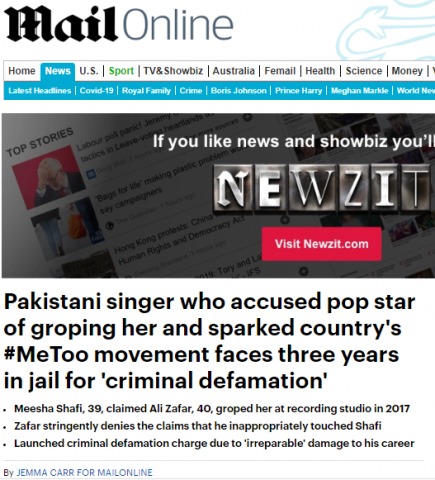 The Indian publications took advantage of the International news, without verification, and started to spread rumors regarding Meesha Shafi.

Indian publications claimed that the singer has been sentenced to three-year imprisonment for falsely accusing Ali Zafar of sexual harassment. 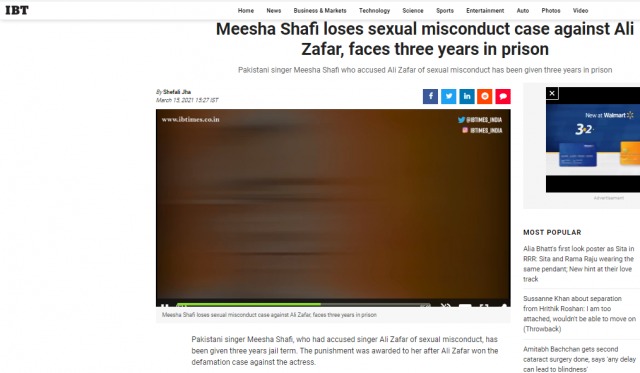 Meesha Shafi’s lawyer Asad Jamal refutes all the rumors spreading regarding the singer’s imprisonment and said in a tweet,

“This is with ref to the fake news claiming that my client Meesha Shafi has been sentenced to 3 yrs imprisonment.”

This is with ref to the fake news claiming that my client Meesha Shafi has been sentenced to 3 yrs imprisonment.
No such verdict has been passed by trial court in the frivolous criminal defamation case instituted by Ali Zafar against several women.
Read complete statement below pic.twitter.com/49vRSXtvFe

They were booked under Section 20 (Offences against the dignity of a natural person) of the PECA and Section 109 (Punishment of abetment) of the Pakistan Penal Code.

Meesha Shafi was found guilty of running a defamation campaign against leading...

Earlier in November 2018, Ali Zafar had filed a complaint with the FIA cybercrime wing, alleging that many social media accounts were posting “threats and defamatory material” against him.

In April 2018, singer Meesha Shafi took to Twitter to accuse Zafar of physically harassing her on ‘more than one occasion.’

“This happened to me despite the fact that I am an empowered, accomplished woman who is known for speaking her mind,” she said. In response, Zafar filed a defamation suit against Shafi.

Meesha Shafi Case: Iffat Omar refuses to back out from testifying against Ali Zafar

Famed singer, Meesha Shafi, who was allegedly found guilty of running a...