Acclaimed Pakistani actress Minal Khan, who remains under headlines after being so open with her beau Ahsan Mohsin, is under fire once again over her extravagant outfit during this holy month.

Minal Khan was spotted at a party last night with Ahsan Mohsin Ikram, but what catches the attention of the netizens was her inappropriate dressing.

Naysayers were quick to bash her for not respecting the holy month of Ramadan and flooded the comments section with extreme anger.

Here Are The Reactions: 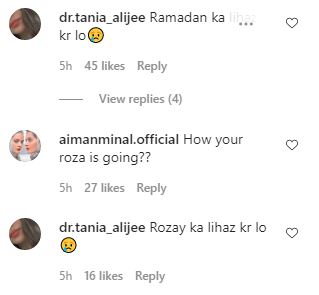 Earlier, the actress expressed her views and declared the month of Ramadan as the favourite time of the year.

Minal Khan shared a photo of herself on Instagram and wrote a beautiful message to her fans saying, “Favorite time of the year!”

She also wrote a prayer in her message saying, “Ramadan Kareem everyone, May Allah bless us all with his kindness Ameen.”

Ali Zafar Expresses Gratitude For All The Birthday Messages And Gifts

The renowned and loved singer, both in Pakistan and India, Ali Zafar has...

BTS: “Butter” Teaser Has Been Released!

ARMY is over the moon as BTS has released the video teaser...

Pakistani actress Ghana Ali has tied the knot with Umair Gulzar on...