The charming Nimra Khan posted a video on her Instagram while taking Tom and Jerry the invisible mouse drinking milk challenge.

Nimra gave a caption to the video: “When I went to school, they asked me what I wanted to be when I grew up. I wrote down happy.”

Fellow actresses like Amna Ilyas and Ushna Shah are loving the overloaded cuteness of Nimra and made some adorable comments. 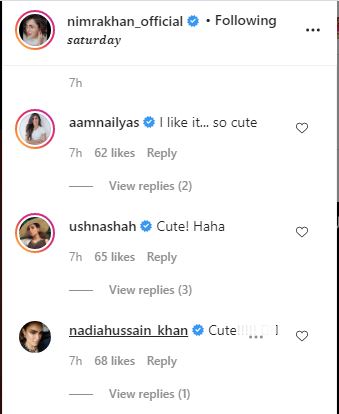 Model-turned-actress Nimra Khan Pakistani never fails to impress her fans and followers with her inspiring styles.

Nimra Khan is considered one of the phenomenal actresses of Pakistan’s showbiz industry. She started her career by playing a brief role in Kis Din Mera Viyah Howay Ga.

Ali Zafar Has A Special Message For Indians & Pakistanis

As India and Pakistan are battling with the deadly coronavirus, Pakistani singer...

On Thursday, veteran actress Atiqa Odho has requested her fans and followers...