Why did Noor Bukhari reject the Ramadan transmission offers?

Pakistani former actress, director, model and television host Noor Bukhari, who has quit the showbiz industry, told the real reason why she will not be hosting Ramadan transmissions this year.

The former actress held a question and answer session on her social media account on Instagram to interact with fans. 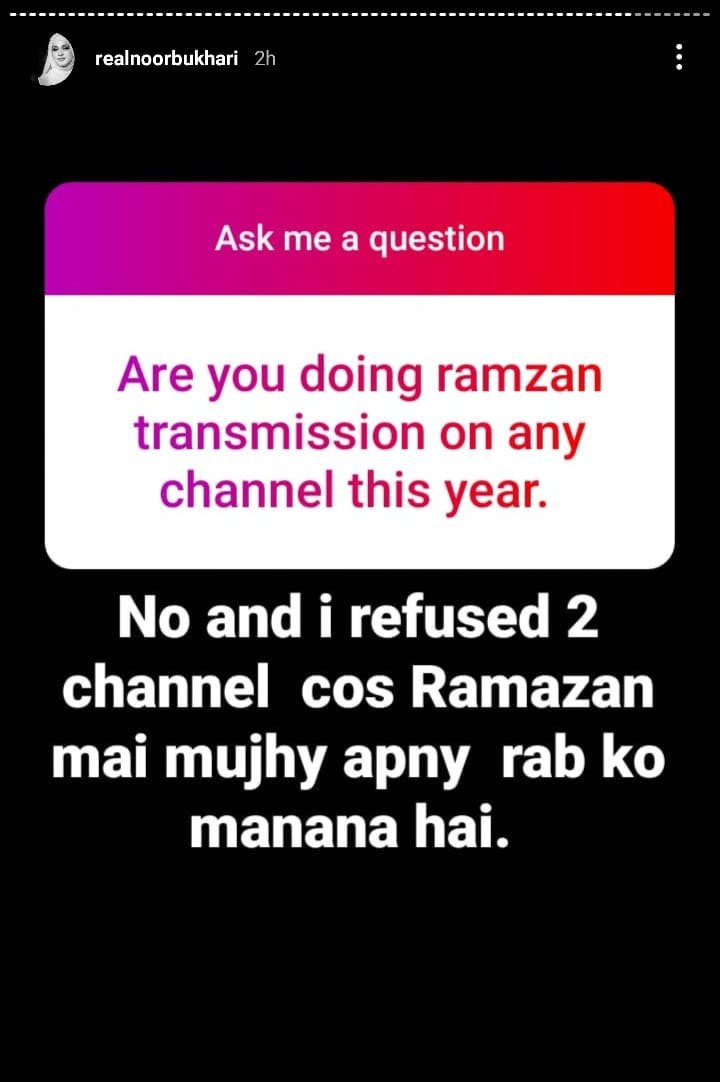 Fans asked the actress if she would be hosting a Ramadan transmission this year to which she replied saying, “No and i refused 2 channel cos Ramazan mai mujhy apny rab ko manana hai.”

Explaining the reason for rejecting the offers, she said that she intends to celebrate her Lord in Ramadan, hence she will not be conducting any Ramadan programs.

Earlier it was rumored that Noor Bukhari was officially returning to television screens after 3 years with a special transmission of ‘Amad-e-Ramadan’ before Ramadan on Pakistani state television.

Noor Bukhari had quit the showbiz industry after her fourth marriage ended in divorce in September 2017 and had announced to live according to the religious teachings of Islam.

Noor Bukhari Gives Once In A Lifetime Opportunity To Netizens

Former veteran actress Noor Bukhari is fed up with all the trolls...

Shehzeen Rahat clears the confusion regarding her rukhsati

Victoria Beckham reveals she was ready to marry an electrician

What did Pakistan actress Neelam Muneer Khan pray for?

Singer and actress Britney Spears has assured her fans that she is...

Agenda of enemies is to weaken Pakistan, Firdous Ashiq Awan