Famous actor Feroze Khan has lashed out at the mob involved in the Minar-e-Pakistan incident where a tiktoker named Ayesha Akram was groped, harassed and molested. Feroze bashed them for not protecting the girl while she was being assaulted. 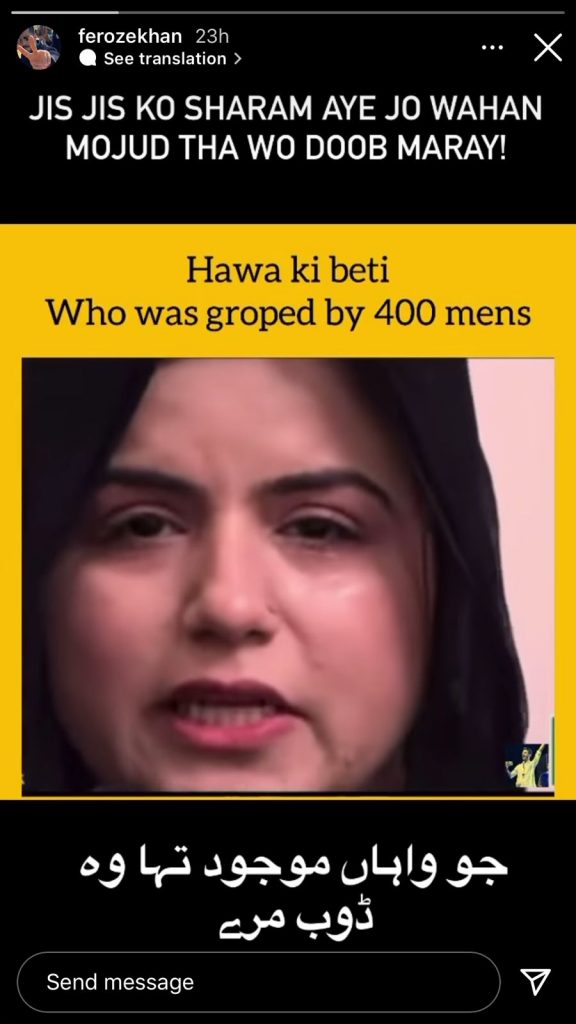 Several Pakistani showbiz celebrities called out the heinous and animalistic incident at Minar-e-Pakistan, Lahore. After a huge crowd of around 300 to 400 men assaulted a female TikToker on Independence Day.

The Incident: What happened to Tiktok Star Ayesha Akram?

Tiktok star Ayesha Akram was filming videos for her Tiktok account with her group of friends at Lahore’s Greater Iqbal Park near Minar-e-Pakistan on Independence Day when this incident took place and the girl was sexually harassed, groped and stripped by 300-400 men, who went as far as to tear her clothes while passing her around between each other.

These men attacked the Ayesha along with her friends at Minar-e-Pakistan even though the group tried to escape but failed because of the crowd being too large.

The female TikToker Ayesha Akram, narrated the nightmare which she faced. She...

Hira Mani's father, Syeda Farrukh Jamal, has passed away. The news was...

Alizeh Shah has made her mark in the Pakistani Showbiz Industry ever...

The stunning pictures of Ayeza Khan, a well-known and gorgeous actress in...

Pakistan to adopt a gender roadmap to achieve equality

ISLAMABAD: The present government is taking the agenda of gender development and...