Hollywood actress Hilary Duff has posted a picture of herself lying in bed with a caption calling the Delta variant of Coronavirus a ‘little bi**h’.

Hilary Duff took to her Instagram stories and revealed that she was down with the delta variant, despite being vaccinated against COVID-19. 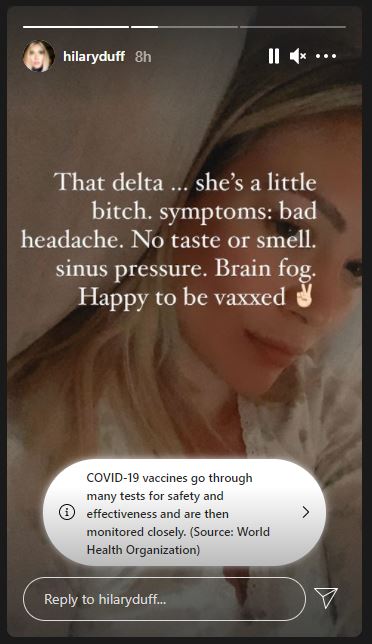 She went on to note that she was “happy to be vaxxed.”

The actress had received her vaccine in April, about a month after welcoming her third child.

In a second photo, she put her bandage on display after the shot and wrote: “Other people raging other things today … I got that Pfizer.”

Earlier in March, the star had announced the arrival of her third child, a girl named Mae James Bair.

She shared a photo of her family welcoming little Mae. The caption simply said, “Mae James Bair- We LOVE you beauty 3-24-21.”

This is the second child for Duff and her husband, Matthew Koma. The couple welcomed their first child, a daughter named Banks Violet Bair, in October 2018.

American actress Hilary Duff has shared a video of a "disgusting" paparazzi...