When we say Ranveer Singh and Janhvi Kapoor hosted the party, we can only imagine how crazy the celebrations were. 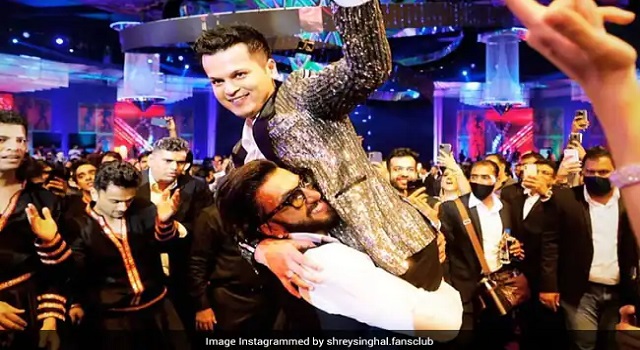 New Delhi: Ranveer Singh was spotted in a tuxedo at Mumbai’s Kalina airport earlier this week. The actor was reportedly on his way to Delhi for Punjabi singer Shrey Singhal’s pre-wedding celebration. And, given that Ranveer Singh hosted the event, one can only imagine how crazy the celebrations were.

With his performances, Ranveer Singh got the party guests dancing to his songs such as Gallan Goodiyaan, Khalibali, Jigar Da Tukda, and, of course, Tune Maari Entriyaan. Here’s a look at Ranveer Singh enjoying a good time at Shrey Singhal’s pre-wedding bash.

Janhvi Kapoor, Vaani Kapoor, and Badshah were among the stars who performed at Shrey Singhal’s bash. Shrey Singhal’s pre-wedding event has been documented extensively on Instagram, with snippets of Singh’s electric energy on stage going viral. On stage, He was joined by the groom-to-be, who matched the star host’s energy.

Khushi and Janhvi Kapoor started their Thursday on a high note when...