Acclaimed actress Aiman Khan hosted a low-key bridal shower event for her twin sister Minal, who is all set to tie the knot on September 10 with Ahsan Mohsin Ikram.

Aiman Khan, along with the Bride’s squad, celebrated Minal Khan’s bridal shower. The bride’s squad also include actress Saboor Aly and Kinza Hashmi as they appeared in PJs to party hard.

One of their friends, Sara Ali, shared multiple pictures from the celebration as the Jalan starlet is soon going to change her surname.

Here’s how Minal Khan is all smiling for the gram as she enjoyed the best of her time celebrating a PJ party themed bridal shower. 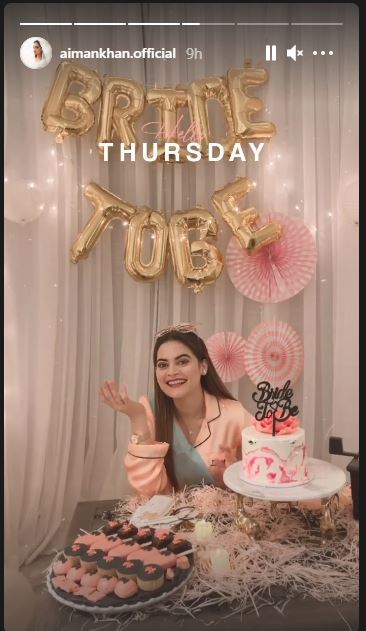 A dreamy engagement for the duo, Minal Khan and her beau Ahsan exchanged rings in a private ceremony on June 11, 2021. The couple is finally getting married on September 10 with their Valima ceremony on September 12.

The couple shared their wedding card on Instagram with adorable captions.

“Where did you come from unannounced? Now you are staying forever!” the Jalan starlet captioned.

Also, Ahsan and Minal will host their wedding reception for their friends and family. “Save the date – 12/09/21,” the actor wrote alongside a photo of his invite posted on his Instagram.