Alia Bhatt vacationing in Maldives Island with her mom and sister

Actress Saba Faisal’s son Salman Faisal and his wife Neha Malik have been dealing with the divorce rumours for quite some time now and the actor had also broken silence over this matter saying: “We are not divorced kindly stop spreading fake rumours and hurting comments. Thank You.”

This time around, Neha Malik, wife of Salman Faisal, also took to her social media to shun the separation rumours and addressed the assumptions very humbly.

“Those asking about the patch up, we never broke up or had any personal fights. We are Alhumdulillah married and will remain together rising above all those who wish us apart till the end of times. Though remember us in your prayers for a happy, successful and blessed life together ahead,” she wrote on her Instagram story.

“Thanks for the concern and much love to all,” Neha added. 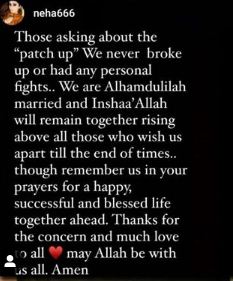 Saba Faisal’s son Salman Faisal married Neha in 2019 in a series of lavish events. The ceremony was attended by a plethora of celebrities including Saba Qamar.

Earlier in 2021 gossip mills were abuzz with the parting and divorce rumours of the couple.

Previously, senior actor Saba Faisal had opened up about the backlash on social media after the rumours of her son’s divorce went viral.

The Ishq Hai diva stated that the criticism and severe backlash put her in a depressive phase.

Are Nawal Saeed And Arsalan Faisal Dating? Find Out!

Why Prince Charles is worry about Prince George's future?

The Prince of Wales, Charles expresses worry for his grandson Prince George’s...

Nowadays Vicky Kaushal is being in the spotlight for his newly launched...