The Ghalat Fehmi singer Asim Azhar recently appeared in an #AskAsim session on Twitter and responded to fans with their queries and fun-filled questions.

But, after being asked when he is getting married and who will be the girl, Asim Azhar replied, seeming the question did not appease him much. “Yar pls maine #askasim karne ko kaha hai morning show nahi,” he said.

Previously, rumours about the singer’s engagement with his friend Merub Ali brought a storm all over social media after Azhar’s breakup with actress Hania Aamir.

However, regarding his relationship with Merub, the Jo Tu Na Mila singer supposedly answered a fan’s DM in which he purportedly denied the commitment, saying, “I consider her just like my sister.”

Earlier in June, Asim Azhar took to Instagram to share no one came to his defence when everyone was trolling him. The singer also addressed the ‘Kat Gaya Kat Gaya’ meme fest, saying everything was directed towards me. 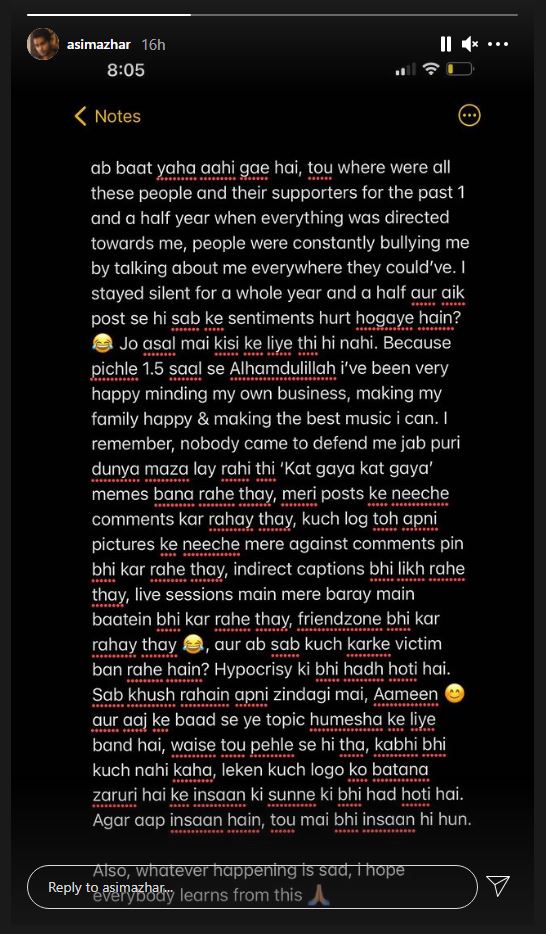 While it was not apparent, the timing of it seemed to be a reply to his ex Hania, who too allegedly put him on blast on Twitter as she wrote: “You can either be a celebrity or a bitter ex with no dignity.”

Prior to that, the backlash had gotten to the actress as she took to social media to share a video clip where she was seen distressed and one of her friends tried to bring a smile on her face.

She wrote a lengthy caption that read: “Just another day surviving in a misogynist world where double standards have power over innocence and where coexisting with a difference of opinion is not a thing.”

She had continued, “Where a man trying to belittle a woman is applauded but if a woman does the same she is hated. Where a woman showing affection to her loved ones is wrong.”

“Just another day surviving. Hope you all are doing well in this disgusting world and keeping your goodness intact. Someone else’s evil shouldn’t ruin your goodness”, Hania had concluded.

Heartthrob singer and musician Asim Azhar has felicitated fans for the immense...