One of the most adored showbiz couples Sarah Khan and Falak Shabir is over the moon after the arrival of their first bundle of joy, a baby daughter.

Both Falak and Sarah took to their separate Instagram handles to share the lovely glimpses of their daughter’s Aqeeqah ceremony. The new parents were also seen posing for the camera with their little Alyana and fans just can’t get over their cute family. 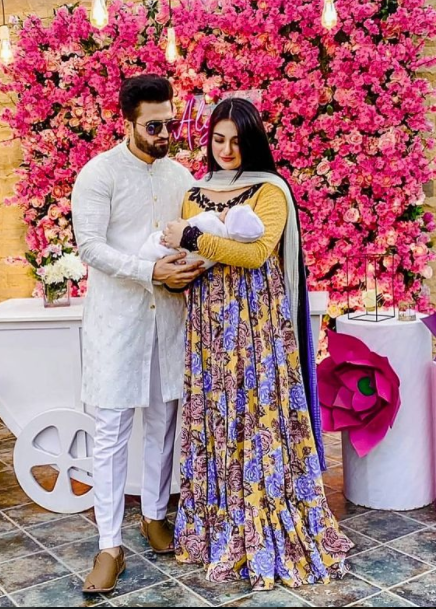 A number of showbiz celebrities including Nausheen Shan, Imran Ashraf, Gohar Rasheed, Shaista Wahidi and others attended the Aqeeqah ceremony.

Falka Shabir also took to his social media to share the beautiful event decor, thrown after his daughter’s arrival.

It should be noted that the power couple welcomed their first bundle of joy on 8 October 2021. The duo had revealed the pregnancy earlier in June through an Instagram post.

Sarah Khan and Falak Shabir walked down the aisle back in 2020 in exuberant wedding functions.

One of the most adored showbiz couples Sarah Khan and Falak Shabir...