After six years, renowned Pakistani actress Ayesha Omar will reunite with her Karachi Se Lahore co-star Yasir Hussain for a film. Unlike their previous collaboration, the upcoming movie is based on the story of a serial killer Javed Iqbal, and will be a suspense thriller.

However, the movie was delayed due to unavoidable reasons. The After Moon Show host recently revealed on his Instagram stories that he has tested positive for Covid’19, and the film in which he was to play the title role of a serial killer will be delayed due to his absence.

In his social media post, Yasir Hussain asked people to get vaccinated and wear a mask to spend time with their family members, something he is unable to do due to being isolated. 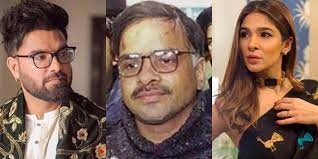 As for the Abu Aleeha directed flick, the Bulbulay actress will play a female police officer working on the murderer’s case. Both the actors have received appreciation for their outstanding performances previously and they have demonstrated their versatility by appearing in comedic screenplays as well as shows that deal with delicate themes. With this film, they might be giving one more reason as to why they are among the finest.

Produced by KK films, this movie is one of the most anticipated ones due to its compelling storyline about a serial killer who sexually assaulted and murdered over a 100 children in Lahore. The monster confessed to his crimes in 1999 and was sentenced to death. But just two years into his sentence, he committed suicide in his cell, but not before revealing that his motivation for murdering young boys was to make their mothers grieve for them, just like his mother was forced to do.

It’s not often that we see Pakistani cinema make biopics about serial murderers, which is why this film is seen as a trendsetter. The teasers will be released soon, and we can’t wait to see who else will be a part of this project.