OPPO introduced the F19 Pro and F19 Pro + 5g back in March this year and unveiled F19 in April. The company is expected to expand its F19 family with the OPPO F19s. It has recently received Bluetooth certification. This confirms the launch.

The certifying authority did not reveal anything about its specifications except its model number CPH2223. It confirms that OPPO F19s will have Bluetooth 5.0 connectivity. 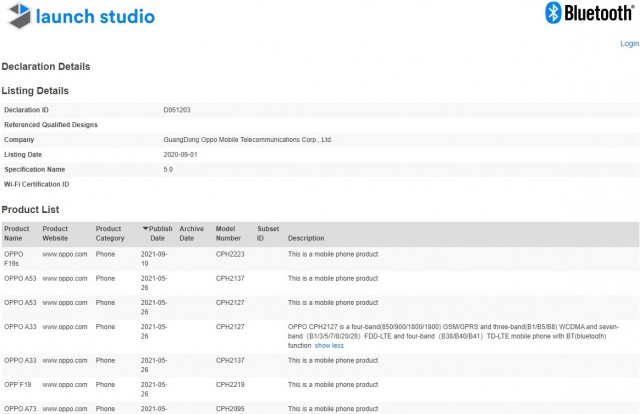 A previous leak claimed that the phone will first release in India with a price tag of INR18,000 (PKR41,175). The leak also claimed that it will feature a Snapdragon 662 SoC at its core.

Other leaks suggest that the OPPO F19s will have a 6.43″ FullHD+ AMOLED display. The phone will have 6GB RAM with 128GB internal storage. It will run Andriod 11 based ColorOS 11.1.

It will have a battery capacity of 5,000 mAh with 33W fast charging support. It will have a triple-camera set at its rear including a 48MP primary, a 2MP macro, and 2MP depth sensors. It will have a 16MP selfie shooter within the punch-hole cutout.

Bitcoin.org got hacked by online scammers

Taliban ready to work with the International community, envoys

The provisional Afghan government has guaranteed Pakistan, China, and Russia that it will...