Pakistani fast bowler Hasan Ali reaches Pakistan along with his wife, Samiya Arzoo after they both tied knot in Dubai on August 20 this year.

According to media reports, the newlyweds reached their hometown in Pakistan with a wholehearted welcome.

Sweet fragranced rose petals were all their way from entrance to the couples’ room with a memorable photo frame from their wedding shoot on the wall.

Earlier on August 20, Pakistan’s pacer Hasan Ali has tied the nuptial knot with Samiya Arzoo at a seven star hotel in Dubai. 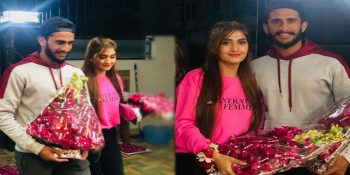 The wedding ceremony, which was held at one of the most expensive hotels, was attended by Hassan’s close friends and relatives.

Samiya belongs to Hariana, India. Hassan met her a year ago through a close friend in Dubai. She studied engineering from England.

The bride lived with her parents in Dubai. She worked for a private airline.

Hasan Ali’s pictures from his pre-wedding shoot entourage in orange kurta had gone viral from the iconic Burj Al Arab in Dubai.

The pre-wedding pictures of the new couple had made rounds on different social media platforms.

Yumna Zaidi is a Pakistani television actress. She was born on 30th...

Mahmood Chaudhry, the husband of Bakhtawar Bhutto, turned 33 on Thursday, and...

Sumbul Iqbal, actress of the Pakistan showbiz industry has tested positive for...