Nida Yasir hits back at naysayer with a befitting reply after she invited ‘Pawri’ girl, Zara Naeem

Soon after the ‘Pawri Horai Hai’ meme took the Internet by storm and even made waves across the border, Netizens called for Nida Yasir to invite the viral sensation on her morning show.

It was a very positive step from Nida Yasir to invite Dananeer and Zara Naeem together counter the negativity spread on social media by people who compared the two.

Apart from the memes, there was an illogical comparison drawn between the pawri girl and the Zara Naeem, who topped the ACCA exams globally.

During the show, both the girls talked to Nida about their lives, aspirations and dreams.

While chatting with Dananeer, the host discussed the work done by several social media influencers. Dananeer was asked about her ideas regarding content creation.

The conversation with Zara revolved around how she managed to score this high and her routine. She was questioned regarding her balance between her academic and social life.

However, responding to naysayers, Nida Yasir hits back at a hater with a befitting reply after she posted the video along with the two girls on her Instagram.

“Pawri hori he. Proud of you girls,” she captioned the post. 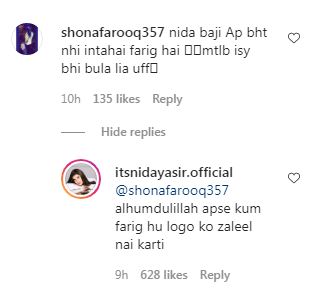 PSL 2021: Remaining Matches Soon To Be Played In Lahore: Sources

Good news for all the dishearted fans of the Pakistan Super League....

The IPL 2021, scheduled to begin from (April 9th), is entertaining tournament...

PCB to announce S.Africa and Zimbabwe’s tour squad on March 10

The Pakistan Cricket Board (PCB) will be announcing the combined Pakistan cricket...