Ayesha Omar Slammed For Dressing Up In Front Of Camera

The #pawrihorihai trend is not ending anytime soon as a new video of Ayesha Omar getting ready for pawri has gone viral on social media.

The Zindagi Gulzar Hai actress shared a video on her Instagram handle accompanied by the pawri girl Dananeer Mobeen and her sister, getting ready to shoot a video wearing a #pawrihorihai t-shirt.

What made the netizens furious was Omar’s way of dressing up in front of the camera.

” it’s almost Ramadan that’s what you wanna show Allah ? I’m no one to judge but dot start to wear shalwar kameez and put taraweeh and naat stuff” 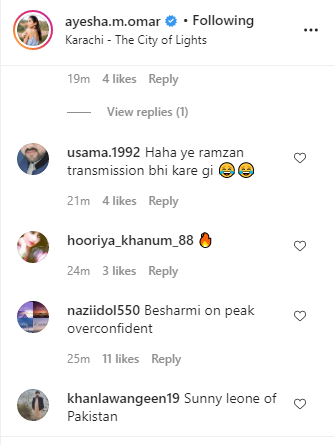 #pawrihorhihai video went viral all over the world in a couple of days after it was uploaded by the creator Dananeer Mobeen on her Instagram account.

The girl in the video says it’s me, it’s my car and, they are my friends and they are doing a party. [Yeh main hun, Yeh humari car hai, yeh mere friends hain, aur yahan pawri hori hai]. The girl’s speaking style, fake English accent, and tone were such that the video was funny to the users while it went viral in a few hours.

The #pawrihorihai trend has united India and Pakistan. Nations of both the...

Mckenna Grace the child star girl who got fame through the horror...

Pakistan Skipper Babar Azam on Wednesday finally achieved his quest to be...

Can you spot 5 differences between these two pictures?

These two pictures look quite similar, but there are eight differences. In...

After getting the number one position in ICC ODI rankings, Pakistan skipper...

Ambassador of Japan to Pakistan on Wednesday called on Chief of Army...