Pakistani actress and model Ayesha Omer was born on 12th October 1981 in Lahore where she grew up. She started her career in Showbiz as a model.

She is famously known for her sitcom Bulbulay also, she made her momentous place in the film industry of Pakistan.

Ayesha is recently cast for a biographical film project along with Yasir Hussain. Previously, Ayesha has been part of two movies, one with Ahsan Khan which is soon to be released and the other is Dhai Chaal. Ayesha is now ready to play another important role in a biopic film of the serial killer Javed Iqbal who was caught and penalized in the ’90s. 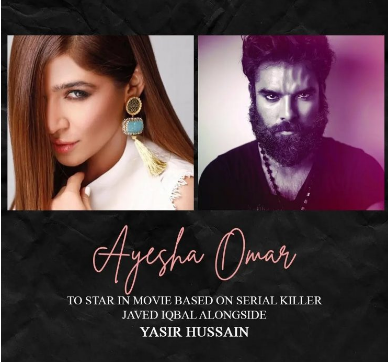 According to the private sources, the makers are aiming to tell the untold story of ‘Javed Iqbal’. The film will be featuring his life history and the most heinous crimes that had been done by him with innocent children. Yasir Hussain is famously known for opting the inspiring and challenging roles and this time his fans are appreciating him for his selection.

Netizens are excited about the upcoming biopic film, people are saying that the movie will turn out to be epic.

Ayesha Omar opens up about her family in new post

Ayesha Omer is a Pakistani actress. She was born on 12th October...