Richa Chadda is an Indian actress who works in Hindi films. She was born on 18 December 1986. She began her career as a model and then she moved to theatre.

She has toured India and Pakistan with her plays. She later acquired her acting instruction at Barry John Acting School. For the past 15 years, our school has provided professional acting training.

Richa Chadha sent a posting on Instagram on how struggling actors are persuaded to perform things that are ‘harmful’ to them. 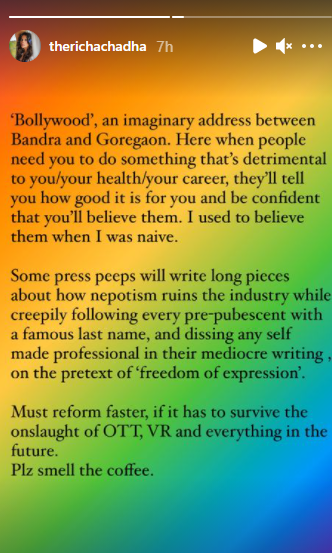 She said, “Bollywood’, an imaginary address between Bandra and Goregaon. Here when people need you to do something that’s detrimental to you/your health/your career, they’ll tell you how good it is for you and be confident that you’ll believe them. I used to believe them when I was naïve.”

Richa Chadha gets success in defamation case against Payal Ghosh