Pakistani singer Bilal Saeed has achieved a great milestone after his Spotify music library has reached one million followers.

The Uchiyan Deewaran singer took to his Instagram to extend thankfulness to his fans and followers. Bilal Saeed becomes the first Pakistani singer to hit the one million mark on Spotify. 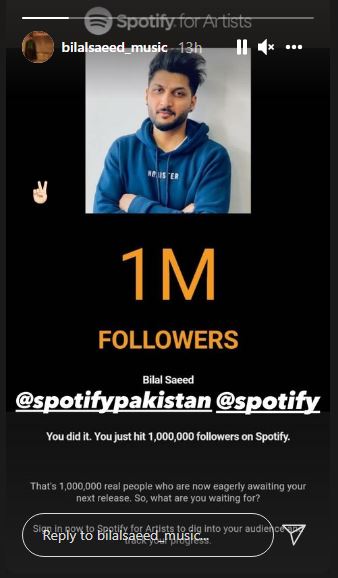 Earlier this month, an arrest warrant against singer Bilal Saeed and actress Saba Qamar was issued to make an appearance at the hearing after the case was registered against them last year amid the Qubool Hai song controversy.

After the release of the song, the case which was registered, stated that the act of filming a music video at the mosque has hurt the religious sentiments of the public. Additionally, it has also appealed for stern action against the mosque administration.

Since the song was released, both Saeed and Qamar, the latter who both acted and directed the video  received intense flak on social media over the issue.

However, Bilal Saeed had subsequently apologized to the public in a video posted on social media.

In the video, the singer had explained that he also belongs to a Muslim family and he could never do anything that is against Islam.

He had said, “We realize what has happened over the past few days has hurt your sentiments deeply.”