Fawad Khan is a Pakistani actor, producer, screenwriter, model, and singer who was born on 29 November 1981.  He has received several awards, including a Filmfare Award, three Lux Style Awards.

Sanam Saeed is a Pakistani actress, singer, and former model who predominantly works in cinema and television. She is best known for portraying the role of Kashaf Murtaza Zindagi Gulzar Hai for which she received numerous awards

Both Actors Fawad Khan and Sanam Saeed are expected to come together for another project after Zindagi Gulzar Hai.

The couple, who received worldwide acclaim for their 2012 drama, is now said to be starring in a web series directed by Shailja Kejriwal, who also directed Qarib Qarib Single.

Shailja posted a snapshot of Fawad Khan to her Instagram account, indicating a collaboration as she wrote, “FINALLY!!!!!!”Zindagi” safal!” in the caption. The director also added a bunch of heart-eyed emoticons.

When a fan in the comments questioned if Sanam Saeed was also involved in the project, Shailja replied with a cryptic emoticon, implying that she would want to remain silent on the subject. 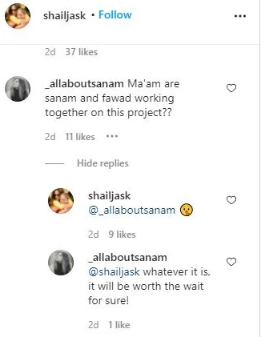 Fawad Khan, a popular actor of the Pakistani showbiz industry and a...