Pakistan’s popular singing sensation Asim Azhar has announced a tributary single for fans after the world cup as he celebrates Pakistan’s historic win against India on Sunday.

The Ghalat Fehmi singer took to his Twitter to announce a celebratory single for his entire fanbase and the cricket lovers. 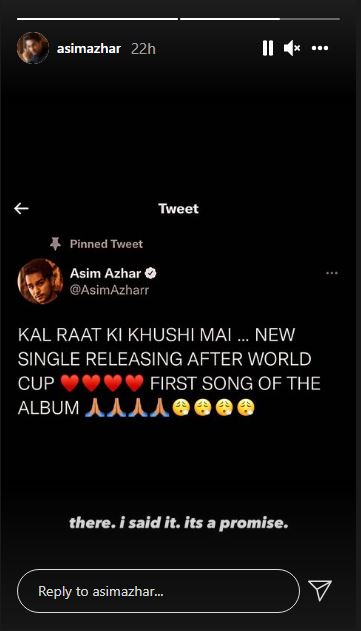 He further assured his fans saying: “There. I said it. It’s a promise.”

It is pertinent to mention here that Pakistan’s cricket team made history on Sunday after thrashing India with a record-breaking 10 wickets. The match marked the first time Pakistan ever defeated India in the world cup.

Apart from the public and fans, many celebrities were equally overwhelmbed by the performance. Stars including Mahira Khan, Humayun Saeed, Adnan Siddiqui, Mehwish Hayat and Asim Azhar shared videos and wishes on Twitter and Instagram.
https://youtu.be/jbBEM4aq9qU