Imran Abbas is a most dashing and one of the talented actors in the entertainment industry. Besides the actor, he is one of the former models, singers, and producers.

Imran is famous for his role in the drama serial Meri Zaat Zarra-e-Benishan. He also works on the silver screen and his first Bollywood debuted film was Creature 3D, he also give his appearance in the Ae Dil Hai Mushkil film.

Recently, Imran Abbas appreciates the on-air drama serial Parizaad and praises the performance of the Ahmed Ali Akbar’s acting in the drama serial. He also compliments the drama team for taking risks with a new storyline 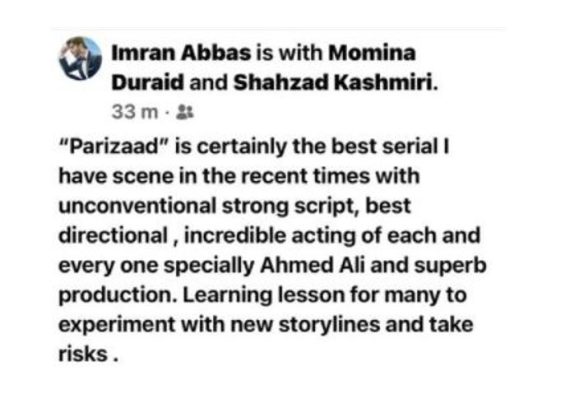 After the Imran post, Ahmed Ali took to Instagram and reposted the Imran comments by thanking him 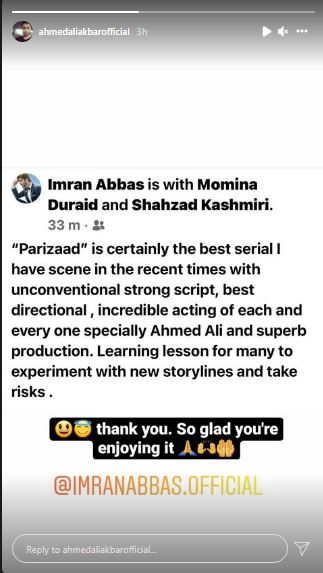 Imran Abbas is a Pakistani versatile actor, singer, producer, and model. He...

Kourtney Kardashian and Travis Barker announced their engagement on Monday morning, after...

Travis Barker and Kourtney Kardashian have taken the next step in their...

Kajal Aggarwal pens a sweet birthday note for her sister

Saif Ali's sister Saba responds to the troll who claims she lives in her parents' past, siblings' present

PARIS: Facebook on Monday announced plans to hire 10,000 people in the...

ISLAMABAD: The 46th National Rehmatul-Lil-Aalameen Conference will commence in the federal capital...

Kourtney Kardashian and Travis Barker announced their engagement on Monday morning, after...

Travis Barker and Kourtney Kardashian have taken the next step in their...