As India also suffers severely from the novel coronavirus pandemic, celebrities have been playing a vital role to keep up the spirit of people to face ongoing circumstances with motivation. Along with others, Bollywood Actress Anushka Sharma is also trying her best to keep her fans motivated amid the pandemic.

‘You never know how strong you are, until being strong is your only choice.” 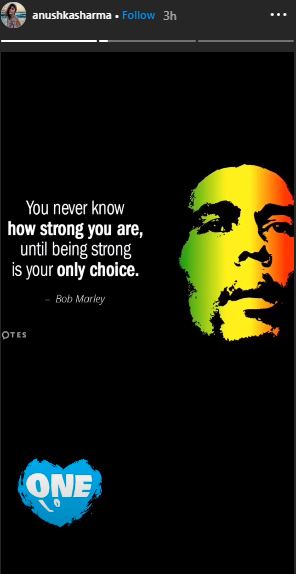 Bollywood actress Anushka Sharma who is in quarantine with her husband, Indian team captain Virat Kohli, frequently shares about her quality time with Virat amid the pandemic.

Earlier Actress Anushka Sharma said it is the most significant for her to be recognized for her skills.

We are celebrating a special day for our superheroes; our fathers. The...

Anushka said to the local source, “I have had an incredible journey, started very well in the industry and got appreciated for the work I did. I stood out as an actor and it is of prime importance to me that I’m known for my work, and I think I established that as an actor,”

She also said, “I took risks as an actor and a lot of them paid off. I think the ability that I have to take risks, to take bold steps with my career choices, has continued, and is reflective of me as a producer, because of the kind of content that we have chosen to produce,”