What Mashal Khan Has To Say About His Ex’s Engagement With Saboor Aly?

To which Mashal Khan has recently commented on this matter via her Instagram story and expresses disappointment over the ongoing gossips after the couple’s engagement. 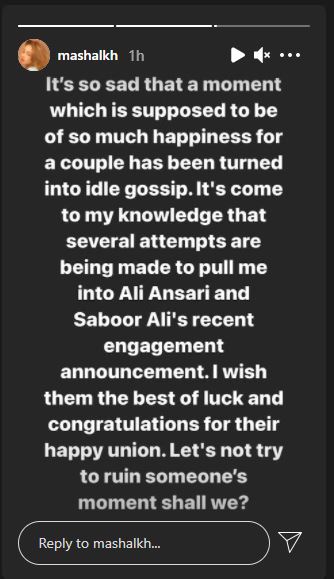 She concluded by saying: “I wish the best of luck and congratulations for their happy union. Let’s not try to ruin someone’s moment shall we?”

Ali Ansai was dating actress Mashal Khan but they both broke up after a very short time. To address the rumours circulating on social media, she had discussed the matter on her Instagram.

On the other hand, Both Ali Ansari and Saboor Aly have shared pictures from their Baat Pakki function and fans just couldn’t get over the lovely couple-duo.

“Baat Pakki. With the blessings of our families, I’m ready to jump into a new life with an amazing person. ALHAMDULILLAH, the Fitrat starlet posted on Instagram.

Soon after the news from them making things official broke out, fellow celebrities, fans and netizens jumped in to pour best wishes and prayers for their future life.

Pakistani actors Saboor Aly and Ali Ansari have made their relationship legal...