Armeena Rana Khan, an actress, is calling out all celebrities who use religion to progress in their careers. On Tuesday, the Janaan actor mocked people in her industry who garner praises through their religious views.

“Advancing acting careers using religious extremism seems to be quite the ‘in’ thing these days. Can’t make it without huh?” wrote Armeena on the micro-blogging app.

Although the actor did not indicate who was her tweet directed at, she did post a follow-up message only after a couple of minutes.

“I’ve also observed that no matter what religion you follow if you’re an extremist then your interpretation of that religion will be extreme also. Conversely, a well-balanced person will find just that in every religion – balance,” Armeena added. 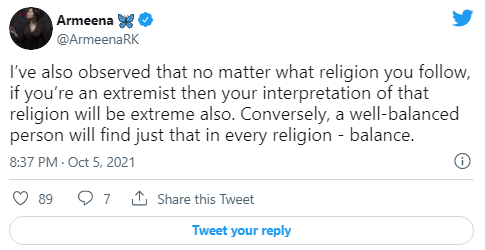 Armeena Rana Khan is a Pakistani-Canadian actress and model who has worked...

Muhammad Yaseen: On a top gear

Muhammad Yaseen is a self-made man, who is successfully running three different businesses....