CM Sindh Murad Ali Shah has announced the complete lockdown in Sindh. People will not be allowed to go out without any valid reason. All the markets will remain closed except grocery stores, meat shops, bakeries
CM issued a statement after a meeting in which he said said we are taking this important decision for the interest of people and hoped that the people will support the government.

The provincial authorities have also sought help of Pakistan Army to ensure enforce lockdown as chief minister’s appeal on Friday to the masses to stay indoors was ignored.

There are 292 confirmed cases of coronavirus in Sindh, highest in all the other province.

“We are about to take major and difficult decisions for the safety of people,” Murad said adding that the government is concerned about the welfare of the masses.
“There’s no option but to impose lockdown in the province and I will announce this later today,” Murad said and urged the masses to stay home. No one will be allowed to hit the road without any strong reason.

“A supervisory team is being constituted to be headed by a Grade-20 officer, said the chief minister. Other departments can contact the officials in case of any difficulty in service delivery.”

The CM said only 2500 people have been tested so far for the virus in the province. “We are increasing the capacity and making it available at all the divisional headquarters in the province.”

Murad Ali Shah also directed the authorities to ensure uninterrupted supply of utilities, TV cable, mobile services, telephone and electricity.
Banks would remain opened and ATM services will not be shut down, he said.

Sindh government has decided to go for complete lock down to cope with coronavirus in the province and also put army on standby to assist the crisis of pandemic.

According to the details, Government of s\Sindh issued the notification. 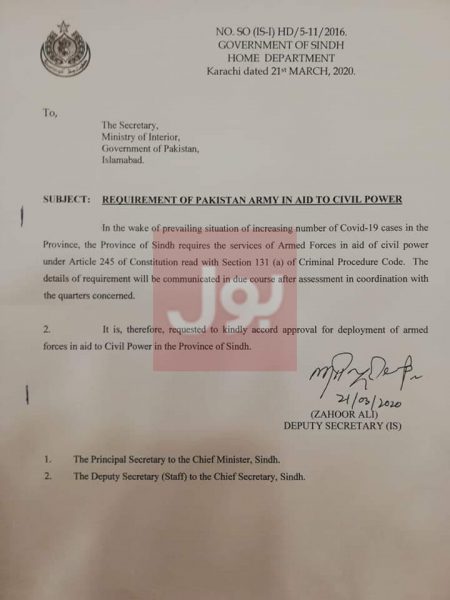 Coronavirus Updates: Latest News Updates in Pakistan and Around the World 22 March