After Ali Ansari got engaged, did Mashal Khan get engaged too?

Govt to guarantee 50% of KPP loans on risk sharing basis

After Ali Ansari got engaged, did Mashal Khan get engaged too?

Actress Mashal Khan and Ali Ansari were close friends in the past but the couple, however, separated last year.

Now Mashal Khan has shared some photos on Instagram in which the actress can be seen flaunting a ring on her engagement finger.

It is being speculated that actress Mashal Khan and actor Kasim Khan are in a relationship and they have got engaged, however, this has not been confirmed yet.

But on the other hand, Qasim Khan also shared a beautiful photo with the actress on his Instagram account.

“Do you believe in angels on planet earth. Because I met one,” wrote Kasim.

Ali Ansai was dating actress Mashal Khan but they both broke up after a very short time. To address the rumours circulating on social media, Mashal Khan had discussed the matter on her Instagram. 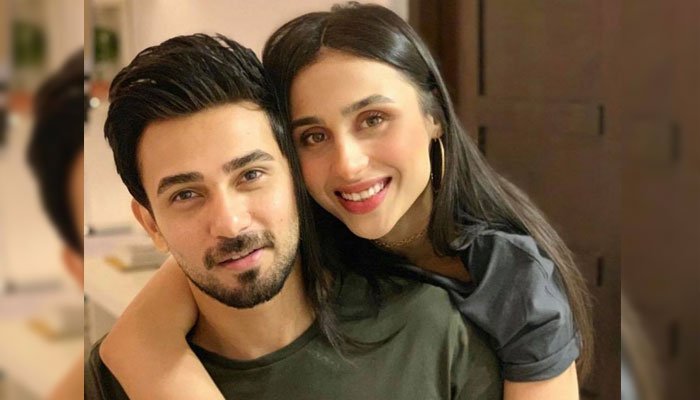 Pakistani showbiz industry has another new couple on the block as actress Saboor Aly and actor Ali Ansari treat fans with their Baat Pakki ceremony on May 1st 2021.

Both Ali Ansari and Saboor Aly have shared pictures from their Baat Pakki function and fans just can’t get over the lovely couple-duo.

“Baat Pakki. With the blessings of our families, I’m ready to jump into a new life with an amazing person. ALHAMDULILLAH, the Fitrat starlet posted on Instagram.

On the other hand, the charming actor took to his Instagram to share picture with his wife-to-be.

“Baat Pakki. Honestly, I’m in a mix of all kinds of emotions right now but most important of all I’m happy. “And of everything we created a pair, that perhaps you may remember.” (Qur’an 51:49). From this day forward you should not walk alone,” he captioned the post.

Sindh's education department has postponed the registration of a private school for...

PIA to operate a special flight to Damascus Arbaeen

In England, a yellow warning has been issued by the Met office

This weekend in England a heavy rain is forecasted due to which...