Naimal Khawar is a well-known Pakistani actress and model who debuted in the film Verna as a child actress. Naimal gained fame after playing the Izza role in the drama series “Anaa.”

Naimal Khawar Khan is flying in love as she cuddles her son Mustafa in her latest social media update.

On Thursday, the mother-of-one took to Instagram to post a lovely photo of herself and her toddler.

She captioned the picture, “Mera Sukoon (My Peace).” 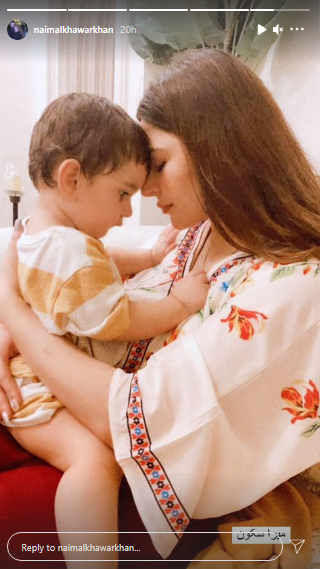 Naimal Khawar welcomed Mustafa with her husband Hamza Ali Abbasi in July 2020, a year after tying the knot.

The celebrity couple had announced the birth of their son on social media on August 3, 2020.

Naimal Khawar, a well-known and gorgeous actress in Pakistan's entertainment industry, has...