‘No NRO, No compromise’: PM Imran

Prime Minister Imran Khan in his statement on Sunday has reiterated that giving National Reconciliation Ordinance (NRO) to the corrupt elements would be equivalent to committing treason with the country.

PM once more has cleared that, “No NRO, No compromise”.

The premier criticized opposition parties and said that the country cannot be developed until they are made accountable.

These people want to hear three words from my side. I will not give NRO to anyone, he affirmed. 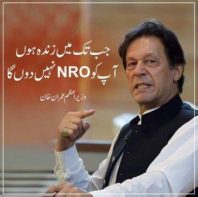 Maulana Fazl has been planning the next course of action for the Azadi marchers to proceed for increasing pressure on the government.

According to the details, PM’s resignation deadline ends tonight raising the stakes in a protest campaign that the government has denounced as a threat to democracy.

The meeting of JUI-F leadership is underway to consider the Rehbar Committee’s recommendations.

Today’s meeting of the committee is expected to decide about shifting the demonstrators from Peshawar Mor to somewhere else.

Maulana Fazl gave PM Khan two days to resign or else he said: “We will be forced to think of another strategy”.

Earlier, Maulana Fazlur Rehman had said that D Chowk is not our destination, we will now take control of the government.

He addressed the participants of the Azadi March in Islamabad, and said that writ of the incumbent government has ended and now “we will run the country”.

The government of Pakistan has launched the “Pass Track App” to collect...

A Coronavirus (COVID-19)  positive lawyer caused a stir when he appeared before...

‘Any Attempt to create chaos in country will not be tolerated,’ says Sheikh Rashid

Can you find a tiny bee in this picture?

A tiny bee is hiding in this field, can you find it?...