Sindh Police has issued their stance in a series of Tweets and said that the unfortunate incident that occurred on the night of 18/19 October caused great heartache and resentment within all ranks of Sindh Police.

They said “As a result, IG Sindh decided to proceed on leave and subsequently, all ranks decided that they would also apply for leave to protest the humiliation meted out to Sindh police. This was a spontaneous and heartfelt reaction and made on an individual rather than a collective basis because every single member of the department felt an acute sense of disrespect.”

“Sindh police is immensely grateful to the Army Chief for realising the sense of hurt that prevailed within a uniformed force, and for promptly ordering an inquiry into the matter, which he has also assured will be impartial in order to restore the prestige of Sindh police.”

“Sindh Police is also grateful to the chairman of the PPP Bilawal Bhutto Zardari and the honourable CM Sindh for coming to the IG House and showing solidarity with the police leadership.”

“Sindh police has always been a disciplined force which believes in institutional harmony between all key national institutions and has always been cognizant of its responsibility to serve and protect the citizens of this province and thus, keeping this in mind.”

“IG Sindh has decided to defer his own leave and ordered his officers to set aside their leave applications for ten days in the larger national interest, pending the conclusion of the inquiry.” 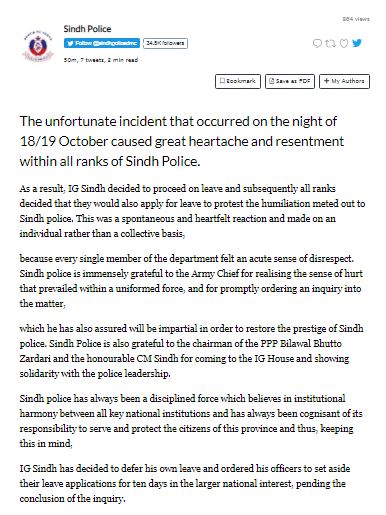