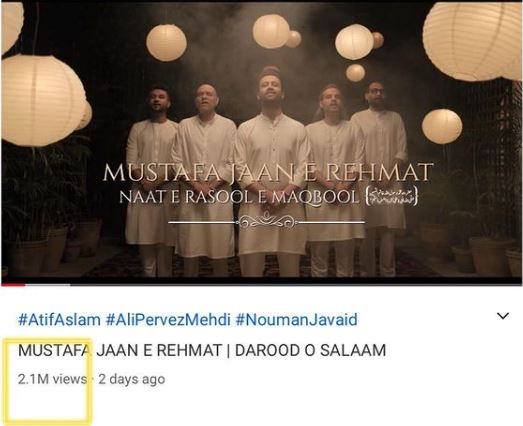 In the blessed month of Ramadan, Atif Aslam appeared with a magnificent gift for all Muslims as he presented a heartfelt version of Mustafa Jaan e Rehmat.

Recited with reverence and dedication, the beautiful video begins with the title Mustafa Jaan e Rehmat along with NAAT E RASOOL E MAQBOOL written in white colour to complement the video’s overall theme.

Along with the singer, Ali Pervez Mehdi, Nouman Javed, Ahsan Pervaiz Mehdi, and Kumail Jaffery, too, took part in the recitation. All of them were seen standing with their hands respectfully folded.

However, soon after its release, many took to social media and praised Aslam for his beautiful take on the popular naat.

From Tajdar-e-Haram to Asma-Ul-Husna, Pakistani Vocalist Atif Aslam has continued to win...

Back in 2015, Atif Aslam had presented a masterpiece of  Maqbool Ahmed Sabri and Ghulam Fareed Sabri’d famous kalam Tajdar-e-Haram for Coke Studio.

After receiving immense appreciation and praise, the father of two had performed in a special track released by Coke Studio, reciting the 99 names of Allah.

Atif Aslam’s mesmerizing voice was the major reason which made the track worth to listen. Fans all over the world had fallen in love with his tremendous recitation of Asma-ul-Husna.

A few days back, while being quarantined, Singer Atif Aslam released a...

Elon Musk and his girlfriend Grimes are 'semi-separated,' co-parenting their son

Tom Cruise and Hayley Atwell, who was rumored to be 'pretty inseparable'...

Sidharth Malhotra is currently on cloud nine as a result of the...

Bank of England takes the stage after Fed signals tapering

LONDON: The Bank of England is set to keep its stimulus and record-low...

Oil prices rose on Friday, nearing a three-year high, and were headed...

Elon Musk and his girlfriend Grimes are ‘semi-separated,’ co-parenting their son